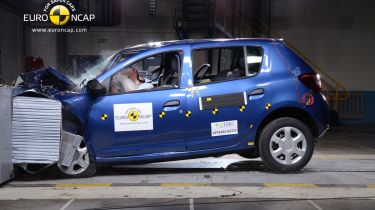 Independent crash tester Euro NCAP has published its latest set of results online, including a revised four-star award for the Dacia Sandero supermini.

The previous Dacia Sandero model achieved only three stars in the Euro NCAP crash tests, but the new model has improved on this thanks to a strong 80 per cent score for adult occupant safety. It was marked down in the side pole impact test and the whiplash test, though, which effectively simulates a car being hit from behind in stationary traffic.

However, four stars is still not enough to match the solid five-star score posted by the current Renault Clio. The Sandero was let down by poor scores for pedestrian protection and its relative lack of standard safety assistance systems such as rear seatbelt reminders and an electronic speed limiter.

Elsewhere, the recently released Renault Captur and Chevrolet Trax SUVs both scored the full five stars thanks to strong results in the passenger protection tests.

To find out how safe your car is, visit www.euroncap.com.