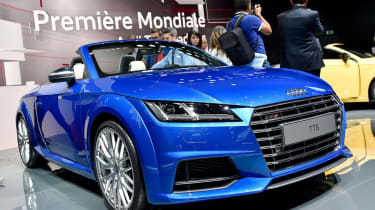 The new Audi TT is officially available to order from today. Priced from £29,770, the car will be delivered to first customers in later November/early December.

The cheapest model will be the Audi TT Sport with a turbocharged 2.0-litre ultra diesel engine. The car will come with a six-speed manual gearbox and will emit 110g/km of CO2, making road tax a very reasonable £20 a year, particularly when you consider the engine's output of 182bhp.

The top-of-the-range TT from launch will be the turbocharged 2.0-litre petrol model with four-wheel drive and Audi's six-speed S tronic gearbox in S Line trim. It produces 227bhp and starts at £35,335.

Far beyond just the distinctive angular grille, the 2014 Audi TT is all new and features a hi-tech dashboard with a 12.3-inch display.

The car's lightweight construction should make the car quicker and more fun to drive, which will doubtless excite enthusiasts, but it also means it’s more economical.

The 2.0-litre 227bhp petrol engine is from the Volkswagen Golf GTI and the 182bhp diesel engine is from the Volkswagen Golf GTD. Hotly anticipated is the Audi TTS, which will be the fastest model in the range when it's made available to order in October - first deliveries are scheduled for March 2015. There are also rumours of a new Audi TT RS, with sales of the new Audi TT Roadster starting after the coupe.

The new Audi TT is available to order now and costs from £29,770. The increase on the cost of the old car partly reflects the range of new technology on board.

The new model’s styling is an evolution of the old TT’s – the most striking difference being the new angular grille that is set to feature on all new Audis. Slimmer headlights help to give the car a more aggressive look and it is also available with Audi's powerful Matrix LED headlights as a £2,375 option. LEDs will feature at the rear, too, to give the TT a distinctive look. Look at the car in profile, however, and it looks very similar to the outgoing model.

The Audi TT demonstrates the next generation in Audi interiors, with a huge 12.3inch TFT display that forgoes the need for conventional buttons. It can be customised to show different information including sat-nav instructions, speed, and controls for the sound system.

Owners are given two view options for the 12.3-inch display – infotainment and classic. The former minimises information such as speed, and makes details such as contacts and music information more prominent. Classic mimics a traditional analogue display with conventional dials.

The new display has allowed Audi to give the TT a far sportier look, with a dashboard that focuses on the driver and a high centre console that offers a cocoon like effect. Controls for the air-conditioning can now be found on the vents themselves.

Boot space is also up, to 305-litres – that’s 13-litres bigger than that of the outgoing model.

The basic Audi TT comes fitted with the 2.0-litre turbocharged diesel engine from the Golf GTD. That will get it from 0-62mph in 7.1 seconds while providing economy of 67.3mpg and emissions of 110g/km of CO2.

If you prefer a petrol version, the turbocharged 2.0-litre petrol model will do 0-62mph in 6.0 seconds. Economy slips to 47.9mpg and CO2 emissions rise to 137g/km, meaning car tax is a more substantial £130 per year next to the annual bill of £20 for the diesel model. The same engine married to Audi's quattro four-wheel drive system and S tronic gearbox can take the TT to 0-62mph in 5.3 seconds but again, you make some sacrifices in efficiency, with the car returning 44.1mpg and CO2 emissions of 149g/km for annual road tax of £145.

Standard equipment on entry-level Sport models includes Audi's multimedia interface with fingertip data entry, sat-nav, Bluetooth, adaptive dampers and keyless go. Sports seats will get Alcantara trim and air-con will also be included. On the outside of the car, LED daytime running lights and 18-inch wheels are fitted as standard.

Following a few months after the TT coupe will be the Audi TT Roadster. It keeps the fabric roof of the old car, and will be available with the same engine, plus the choice of two or four-wheel drive and manual or automatic gearboxes.

When it's added to the range next year, the Audi TTS will become the fastest model in the range, using a 306bhp version of the 2.0-litre turbocharged petrol engine. Fitted with Audi’s seven-speed automatic gearbox and four-wheel drive, it will be capable of 0-62mph in 4.7 seconds, which compares well to the basic Porsche Boxster, which gets from 0-62mph in 5.7 seconds.

If that’s not fast enough, there are also rumours that there will also be an Audi TT RS. It will use a revised version of the 2.5-litre petrol engine in the current RS, tuned to produce 355bhp.

Audi has also hinted of a hardcore model capable of 0-62mph in 3.7 seconds. Called the Audi TT quattro sport concept, it was shown at the Geneva Motor Show and features a stripped out interior and four-wheel drive. 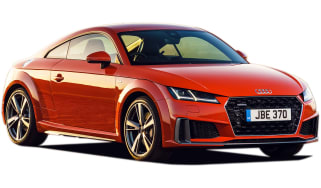 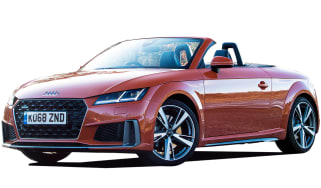