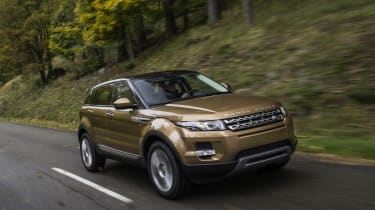 The new Range Rover Evoque 2014 has been revealed, with a series of new features and a revised focus on keeping fuel costs down. We’ll be driving one in the next few weeks, to see if the fuel-sipping measures make the new Evoque any better to own.

A common complaint from owners of the existing Range Rover Evoque was the amount it cost to run. In an effort to rectify this, Land Rover has introduced an all-new nine-speed automatic gearbox, which will come as standard on all automatic models ordered from now. As is the trend for new gearboxes, the extra gears should make motorway driving more economical, while also improving the car's performance thanks to an adaptive shift system that adjusts itself depending on the way it is being driven. BMW, Audi and even Jeep use eight-speed gearboxes, and Land Rover has seen sense in adding another ratio.

A new feature called Active Driveline is also available on the 2014 Range Rover Evoque – a system that turns the four-wheel drive system into a two-wheel drive system when the car doesn’t need the extra traction. This system automatically activates at speeds over 22mph, and means fuel economy is slightly improved in general driving. The car will also have a clever electronic system to improve grip when cornering.

Thanks to the new gearbox and four-wheel drive system, fuel consumption will be down by about ten per cent, while emissions should see a significant fall of around nine per cent in the new car, too. We’ll find out in the coming weeks if these changes have a noticeable effect on real-world economy.

However, Land Rover hasn’t made any changes to its manual gearbox. That means the most economical car will be the two-wheel drive ED4 2.2-litre diesel model with a manual gearbox. Economy and emissions figures for this model remain unchanged, boasting the same 57.6mpg and 129g/km CO2 as the current car.

A new ‘InControl’ app for smartphones can connect to the new Evoque, which monitors things like how much fuel your car has left, and can steer you back towards it if you forget where you’ve parked. It’ll also feature options like a wading sensor for driving through deep water, traffic sign recognition and a self-parking system that automatically exits parking bays.

The new Range Rover Evoque's styling has been updated as well, although it will take a keen eye to spot the changes. The most noticeable will be the new paint colours, including Zanzibar Bronze, and the changed badge on the grille and tailgate. A new range of alloy wheels will be available as well, which will help the new model to stand out.

Prices for the new model haven’t been announced yet, but the range currently costs from around £29,000, with the automatic version priced from just under £33,000. We expect the 2014 model to match the old car like-for-like.