The Jaguar C-X17, a new 4x4 concept car, has been revealed at Frankfurt 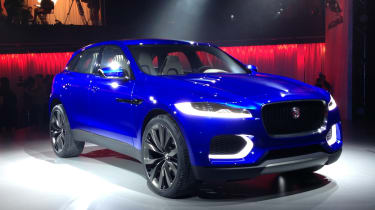 The new Jaguar C-X17 4x4 concept has been revealed at the Frankfurt Motor Show 2013. We've got snaps from the car's official reveal in Germany, and the car will be on display at the Jaguar stand for the duration of the event.

Although it’s undoubtedly a concept car at this point, the Jaguar C-X17 will eventually make it to production in 2016. It will follow the launch of a new BMW 3 Series rival from Jaguar, and will use many of the same mechanical parts as that car, including a weight-saving aluminium construction.

Images of the new Jaguar C-X17 SUV show that it shares its styling with the Jaguar XJ saloon: the distinctive Jaguar grille and prominent badge are the mot noticeable features, with some narrow headlights and a large bumper as well. The interior features lots of white materials and blue lights for a very futuristic look, as well as two touchscreen displays – with Internet connectivity. It’s very much a concept at the moment and we don’t expect the production car to be as radical inside.

A roof spoiler and sleek taillights can be seen on the back of the 4x4, giving it a sporty look. The car rivals the BMW X3 and Audi Q5, and its sporty looks show that Jaguar is targeting younger buyers who want style and sportiness. Jaguar has filed trademark applications for ‘XQ’ and ‘Q-type’, which gives us an idea about what the production version might be called.

Engines in the Jaguar 4x4 are likely to include the range of 3.0-litre V6 petrols and diesels for the higher-spec models, but we also expect Jaguar to offer some smaller 2.0-litre engines. These will be both petrol and diesel, and will use turbochargers to improve power and economy.

For buyers who want lots of performance the SUV could get a 340bhp 3.0-litre V6 engine, and a petrol-electric hybrid will appeal to customers looking for an efficient luxury SUV getting under 100g/km CO2. There will be plenty of Jaguar's latest technology inside the car, including an eight-speed automatic gearbox and electric power steering.

Jaguar says the C-X17 concept showcases the versatility of their cars and looks to the future for Jaguar cars – so some new features, like the lightweight aluminium construction, could apply to new versions of the XF and XK from 2015.