BMW 3 Series GT review: what’s it like to live with? 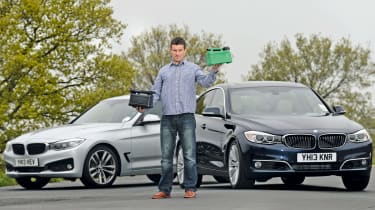 What is a BMW 3 Series Gran Turismo really like to own? CarBuyer editor-at-large, Mat Watson, will be spending the next year with the car to find out, in this real-world review. He'll be living with it on a daily basis to find out what we can't from a normal review - what it's like to have one.

Black or green? Or should that be silver or blue? That was the choice I faced when we were offered a BMW 3 Series Gran Turismo for CarBuyer's fleet. The silver car is a BMW 318d GT diesel, while the blue one is a BMW 328i GT petrol.

Seeing as 11 of the 15 cars in the CarBuyer and Auto Express garage are diesels, a petrol somehow seemed more interesting to me. The fact that the 328i can cover 0-62mph in 6.1 seconds – that’s 3.6 seconds quicker than the diesel – had nothing to do with my decision. Honest.

Also, BMW is making a big deal about its new, downsized petrol engines. Not so long ago, choosing the 328i would’ve meant a thirsty six-cylinder engine, but today you’ll find a 2.0-litre turbocharged four-cylinder under the bonnet. Okay, it’s still not as economical as the 318d diesel (which does a claimed 62.8mpg), but the promised figure of 44.1mpg is acceptable, considering the performance. In our experience, many cars fail to live up to the manufacturer's claimed figures, so I devised a little experiment.

Before I took delivery of the 328i GT, we had a 318d GT in the office to test. I drove it from London to my mother’s home in the West Midlands, and over the 100-mile journey (which was mostly motorway), I averaged 52.3mpg. For the return journey, I swapped into the 328i, and as I arrived back in London, its trip computer read 44.8mpg.

I may have been a bit more tentative with the throttle in the petrol car, subconsciously trying to justify my decision. Also, I ran it in super-frugal Eco Pro mode. But that doesn’t matter, because I had proof that the 328i GT could do what BMW said it would do.

I’ve calculated that over the course of six months, covering an estimated 5,000 miles, choosing the petrol model should cost me an extra £76. That’s a small price to pay for the quieter, smoother and faster car.

Sadly, it’s not going to work out quite that simple. As our spec panel shows, our overall average economy in the 328i so far is not 44.8mpg, but 28mpg. The reason for this? After my initial motorway economy run, the 328i was driven much harder for the following 600 miles. And that’s the problem with these small turbocharged petrol engines: they can be very economical if driven sedately, but it’s almost impossible to resist putting your foot down. And when you do, they drink fuel at an alarming rate.

So, a quick recalculation of my running costs based on the poorer fuel economy figure shows that choosing the petrol car instead of the diesel is actually going to cost me an  extra £474 over six months. Maybe I didn’t go for the right-coloured pump after all?

On the bright side, the comfortable suspension and raised driving position over the BMW 3 Series saloon do a good job of improving the ride. It's still fun to drive, and having done more than 3,000 miles in our car on a variety of roads it's proved a brilliant long-term test car.

With the BMW 3 Series GT’s £750 adaptive M Sport suspension in comfort mode, London's poorly surfaced roads aren’t a bother, despite our model’s optional 19-inch alloys. The £1,660 automatic gearbox provides smooth, effortless progress, yet instinctively finds the right gear should you suddenly need to nip through a gap in traffic.

Meanwhile, the raised ride height lets you see further up the road and spot potential hazards. And when a pedestrian, cyclist, taxi, runner, horse, or bumbling electric car inevitably pops out of nowhere and into your path, the brakes provide plenty of stopping power.

Unfortunately, the light interior marks easily. There’s already a scuff in the rear passenger door (not me) and a few dark patches in the boot from carrying a bike (me). Then there’s the £160 walnut trim on the dash. Really, only Bentleys and Rolls-Royces look good with wood. In anything else it seems geriatric and is at odds with the car's sporty personality.

In fact, this is what I like most about the 328i GT. I know that, after soothing me in town and wafting me up the motorway, it’s also fun on a twisty road – putting the car into sport adds weight to the steering, sharpens the throttle and stiffens the suspension.

Trouble is, I can’t resist thrashing it – hence our poor 28.3mpg fuel economy, which is well down on the official 44.1 mpg figure. Still, in every other way the 3 Series GT lives up to BMW’s classic slogan – because for my personal needs, it really is the ultimate driving machine.