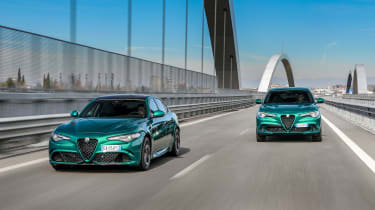 The Alfa Romeo Giulia and Stelvio Quadrifoglio high-performance models are getting a range of updates for 2020. They include styling tweaks, new accessories and technology upgrades. Both refreshed flagship models will go on sale this summer, with prices and full specifications set to be announced soon.

On the outside, the cars get new, darkened LED tail-light clusters and glossy black badges. You can choose 21-inch alloy wheels on the Alfa Romeo Stelvio QV for the first time and three new paint colours are available, paying homage to some of the Italian brand’s classic models. Besides the ‘Montreal Green’ shade shown here, there’s the choice of ‘6C Villa d’Este Red’ and a yellow called ‘GT Junior Ocra’.

Alfa Romeo’s parent company, Fiat-Chrysler Automobiles (FCA), has an accessories arm called Mopar, and the Stelvio and Giulia Quadrifoglio get a selection of exclusive new extras under that brand name. These will include carbon-fibre mirror caps, plus an updated rear spoiler and a V-shaped grille in the same material. An Akrapoviç titanium exhaust with carbon-fibre tailpipes can also be specified. 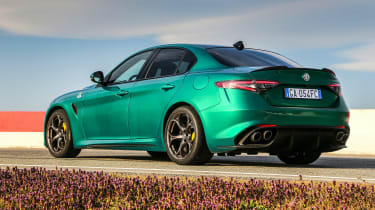 Alfa has also given the interior a lift, with an all-new 8.8-inch touchscreen infotainment system. It’s the same size as before but it’s said to feature a new design and connected features. Fittingly, the racy Quadrifoglio models get dedicated menus showing data including component temperatures, turbo pressure and acceleration speed.

The centre console has been tweaked to look more attractive and to provide extra storage space, and there’ll be a new leather-trimmed steering wheel and gear lever. Seat choices have grown, too, as you can opt for new perforated upholstery or carbon-fibre Sparco bucket seats. The seatbelts can be chosen in green or red, rather than just black, for the first time.

Prices and specifications are yet to be announced but we suspect you’ll need to pay a little more for an Alfa Romeo Giulia and Stelvio Quadrifoglio. The current cars cost £65,555 and £71,880 respectively.

To celebrate its 110th anniversary, Alfa Romeo recently revealed the limited-run Giulia GTA and GTAm. These are stripped-out specials that’ll cost over £150,000 and have a little extra power over the standard Quadrifoglio’s 503bhp. 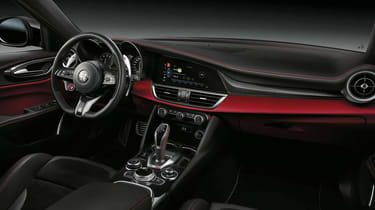 The updates seem minor but they bring the Quadrifoglio models in line with the rest of the Giulia and Stelvio ranges, which got the updated touchscreen and Level 2 self-driving capability earlier this year. As a result, it might be worth waiting until the summer if you’re interested in either car, although dealers may be looking to quickly sell the cars without these upgrades, so you could get a good deal on them.

Read our guides to the best four-door sports cars and fastest SUVs to buy this year.