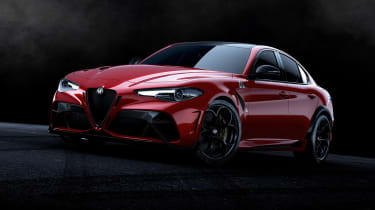 Created to celebrate Alfa’s 110th anniversary, these new cars reintroduce the famous GTA badge, first seen on an Alfa Romeo in the 1960s. With such a high price, the GTA and GTAm have few rivals besides the similarly hardcore Jaguar XE SV Project 8. Deliveries of the new cars are set to take place in mid-2021.

You can choose from GTA Red, Trophy White and Montreal Green paint colours, chosen to represent the Italian flag. Alfa Romeo is also offering a range of appealing liveries, each a homage to successful Alfa sports cars from previous decades.

The Alfa Romeo Giulia GTA twins use the same 2.9-litre Ferrari-derived V6 engine as the Quadrifoglio but power has been upped from 503bhp to 533bhp for a 0-62mph-time of just 3.6 seconds. An Akrapovič titanium exhaust is also fitted, which is much noisier than the Quadrifoglio. Along with the extra power, the GTA weighs less and features aerodynamic additions to further improve performance. 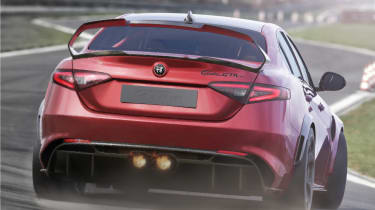 There’s a much wider use of carbon fibre than in the standard car; the GTA gets driveshafts, front wheel arches, a bonnet, front bumper and roof made out of the lightweight material. The GTAm has just two carbon-fibre seats, six-point racing seat belts and a roll cage, and as a result it weighs over 100kg less than the Quadrifoglio.

Both cars get a sharper front bumper with a chin spoiler and naked carbon-fibre inserts, plus black centre-locking alloy wheels and black rear wheel arch extensions. The rear bumper is all-new, with the Akrapovič exhausts mounted in the centre, each side of a huge functional diffuser. In addition, the GTAm gets an enormous carbon-fibre boot lid spoiler. The cars have a 50mm wider track (the distance from one wheel across the axle to the other) and thorough suspension changes.

The GTAm also gets a stripped-out interior, with no door panels, rear seats or proper door handles. Both get carbon-fibre inserts and lots of Alcantara suede-like fabric.

Production will be limited to just 500 cars, with the allocation split between the GTA and GTAm. Buyers will get a tailored race suit, shoes and gloves from Alpinestars and a Bell race helmet, plus a car cover, all included in the cost of the car. The 500 customers also get to attend a driving course at the Alfa Romeo Driving Academy.

Read our Alfa Romeo Giulia review, or check out the best-looking cars on sale.