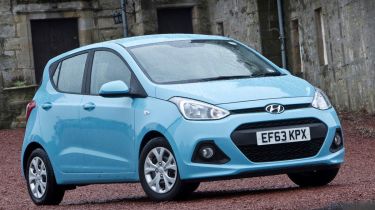 Euro NCAP has awarded the Hyundai i10 an overall safety rating of four stars after putting it through the standardised crash tests for new cars.

The Volkswagen up!, Skoda Citigo and SEAT Mii were given five-star ratings in 2011 but the new i10 is the first in the city car class to be put through its paces since Euro NCAP made its tests more stringent.

Euro NCAP, the independent body that crash tests new cars to give consumers an idea of how safe they are, assesses a car in four different categories and then weighs the scores with respect to each other to decide on an overall rating.

Cars in the city car class have historically struggled to achieve the full five-star rating because their size means they fare worse than larger cars in crash tests. There is also pressure to keep weight and costs down, meaning city cars aren’t always as robust as bigger cars. Manufacturers will also often offer basic versions of their cars without all the safety equipment that is standard on some models in order to offer customers the lowest price.

Given that the i10 is the first car of its type to be tested under the new Euro NCAP tests, it's difficult to make like-for-like comparisons with rivals previously tested - we'll have to wait for the scores of other city cars tested in the future to get a better idea of exactly how the i10 performed.

For reviews of the cars in the current Hyundai range, visit the Carbuyer Hyundai reviews page.