Price, release date and full specifications list for the latest generation of the mid-size hatchback has been revealed 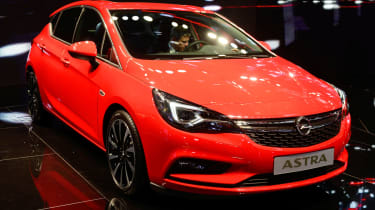 Vauxhall says the new Astra takes design cues from the Opel Monza concept car – albeit in a watered-down form.

Vauxhall also claims that on average around 130kg has been shaved off the weight of the new car compared to its predecessor – in some versions as much as 200kg. That means the new Astra is more fuel-efficient and handles better than the old model. We explain all of this in our full Vauxhall Astra review. 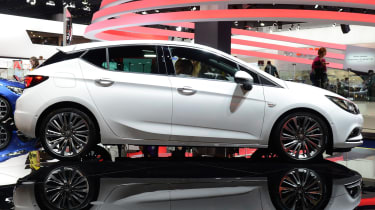 Inside, Vauxhall has made a concerted effort to improve the quality of the dashboard and interior. Loads of technology has been added, including an updated version of the brand’s IntelliLink infotainment system, which includes both Apple CarPlay and Android Auto systems for interfacing with your smartphone.

Since the Astra name was originally launched more than 35 years ago, around 2.9 million examples have been sold.

The previous Astra’s engine range was starting to show its age, so fortunately, the new model can be fitted with the brand’s latest 1.4-litre turbocharged petrol, which provides a healthy 143bhp and weighs less than the old 1.4-litre petrol. 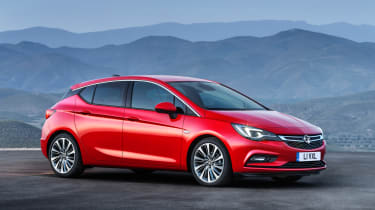 A smaller 1.0-litre three-cylinder petrol engine, similar to the one used in the Vauxhall Corsa, is available, along with the ‘Whisper Diesel’ engine from the Vauxhall Insignia.

Horsepower in the new Astra ranges from 99 to 197bhp, depending on the engine.

As with the Corsa, the new Astra has a vastly improved interior. Quality materials like soft-touch, rubberised plastics and classy gloss trim have been used, and thanks to a larger touchscreen infotainment system than before, the dashboard layout is a lot tidier, too. 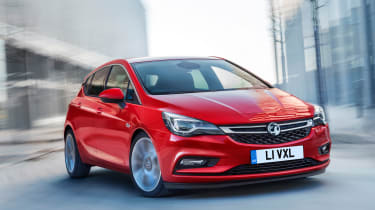 That touchscreen system is an updated version of Vauxhall’s IntelliLink that includes both the Apple CarPlay and Android Auto phone connection software – something Vauxhall claims is a first on a “mainstream” production car.

Alongside this suite of safety kit, Vauxhall has fitted its OnStar ‘connected car’ service to the Astra. This can be used to contact the emergency services in the event of an accident, or a member of the OnStar advisory team to get roadside assistance in the event of a breakdown. The operators can help with technical queries and route planning, too. 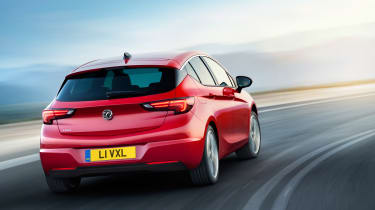 The new Astra also features glare-free LED headlights. Named IntelliLux by Vauxhall, these lights detect the presence of other cars and adjust their beams accordingly; this means no glare for oncoming traffic and a much brighter road ahead for you. The LED headlights are said to have a longer life than the average halogen or xenon bulbs, too.

The new Astra has a similar range of trim levels to its predecessor, ranging from Design to SRi and Elite. The full specifications list can be found below.

The new Vauxhall Astra takes design inspiration from the Opel Monza concept car seen in 2013. That car was a low-riding, two-door coupe with upward-opening doors, but the new Astra takes little details, such as the chrome bar on the front grille and a divided window pillar that makes the roof look like it’s floating. 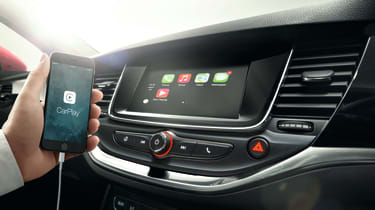 The new Astra is slightly smaller outside than the outgoing model, but thanks to clever packaging, it’s actually bigger inside. Vauxhall has redesigned the seats to give passengers in the back an extra 35mm of legroom.

The new Astra is on sale now priced from £15,295. Vauxhall claims that the new model can be up to £2,200 cheaper to buy than the model it has replaced, which should keep the car competitive in the fiercely contested family hatchback class.

The Astra is an incredibly important new model for Vauxhall, as its predecessor has frequently figured among the top 10 best-selling cars in the UK.

The new Astra is being built at Vauxhall's UK plant in Ellesmere Port, where the Astra has been built since the first generation launched more than 35 years ago.

Want to know more about OnStar? Check out our beginners’ guide to the connected car service.