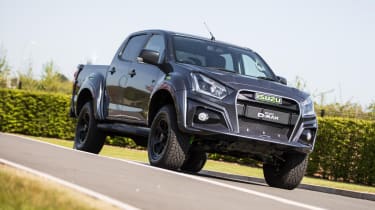 The Isuzu D-Max XTR Colour Edition, a new range-topping model of Isuzu’s pickup truck, has been revealed. It adds a smattering of bright green touches to the standard XTR trim and features an improved suspension setup.

Prices and the number of examples to be produced will be revealed once Isuzu showrooms open again after the coronavirus lockdown, but it’s likely to cost a little more than the XTR, which costs £34,000 excluding VAT.

The Colour Edition has the same body kit as the standard XTR but there are a few more body-coloured parts, including the bonnet protection, bumper guard and wheel arch extensions, plus a few vivid highlights. These include the Isuzu badge on the nose, the wheel arch inserts and the brake calipers, while much of the suspension also gets a colourful makeover. Heavy-duty 32-inch Pirelli all-terrain tyres are fitted to black 17-inch alloy wheels, while four paint colours are available. 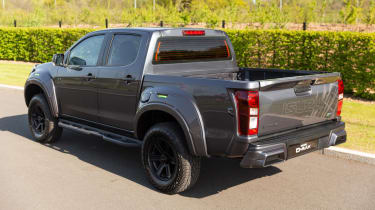 You’ll find green stitching and XTR logos inside, where the Colour Edition also features seats upholstered in a mix of leather and suede, a flat-bottomed steering wheel, a Pioneer sat nav touchscreen and heated front seats.

Improvements to the Pedders suspension go further than the green paint; the Colour Edition gets a new upper front arm and uprated dampers, allowing for more wheel articulation than standard D-Max models. The ground clearance is up to an impressive 250mm, while the cooled and vented brakes have kevlar ceramic pads.

Isuzu says the XTR is aimed at customers who’ll use a truck for leisure and work, in a similar vein to the Ford Ranger Wildtrak and the Toyota Hilux Invincible.

A striking new body kit sets the XTR pair apart from more affordable D-Max models. On the standard XTR, the front of the truck is almost completely taken over by chunky black plastic in place of the usual body-coloured bumper. The grille is larger and a different shape, and there are black accents around the headlights and a deflector on the front edge of the bonnet.

All D-Max models come with a 163bhp 1.9-litre diesel engine. With this engine, the D-Max is capable of towing up to 3.5 tonnes, and comes with a five-year/ 125,000-mile warranty that includes roadside assistance. 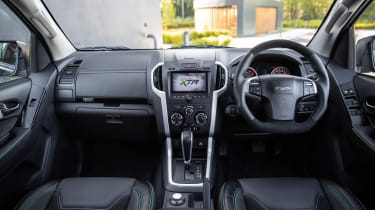 Isuzu has also revealed a tipper conversion for business users and an even more rugged one-off D-Max, set up for serious off-roading.

Read our reviews of the Mitsubishi L200 and Volkswagen Amarok, two of the D-Max’s main rivals.