The launch of the new Mercedes GLE started with a bang as Mercedes revealed the 585bhp flagship – the AMG 63 S – at the Detroit Motor Show press day, alongside more basic models in the new GLE range.

Officially, the top-of-the-range model will be called the Mercedes-AMG GLE 63 S-Model – to fit in with Mercedes’ new naming strategy for AMG’s performance-orientated models.

Thanks to an all-new twin-turbo charged V8 engine, the BMW X6 M rival can sprint from 0-62mph in 4.2 seconds and (when fitted with the AMG Drivers’ Package) keep going to a top speed of 174mph.

For such a big car, the AMG 63 S should be fun in the corners thanks to kit such as AMG Ride Control sports suspension, Sports Direct steering and roll stabilisation all coming as standard. It will also have Mercedes’ 4MATIC four-wheel-drive system.

The range-topper has been treated to a muscular look with a deep front bumper, AMG’s dual-bar grille, and quad rhombus (four-sided) shaped exhaust pipes.

The car goes on UK sale in June and (while Mercedes has not revealed figures) it should be priced to compete with the £93,000 BMW X6 M.

The former produces 258bhp and should return good fuel economy for a car of this size, although we’ll have to wait and see exactly how good. The 369bhp 450 AMG Sport looks set to offer something of a happy medium between the performance of the AMG 63 S and the economy of the diesel model, although it will be pricy to run. It’s also the first Mercedes to come with the AMG Sport trim level – to rival BMW’s M Sport specification.

Prices should start from around the £55,000 mark and the GLE will (like the Mercedes ML in 1997) star in the upcoming Jurassic Park film.

Mercedes also used Detroit to announce the Mercedes GLC (previously the GLK), which unlike the old model will be sold in the UK, and the Mercedes GLS SUV that replaces the GL. 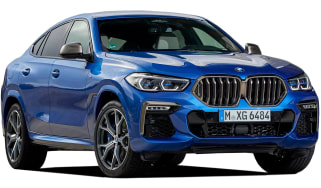