Nissan turns over a new Leaf with extended battery range 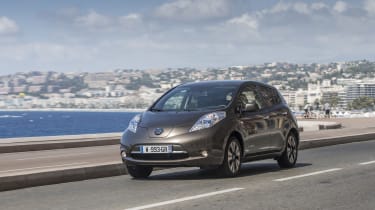 The Nissan Leaf will soon be able to travel further on a single charge, thanks to the addition of a new 30kW battery.

The introduction of a more powerful battery to the range means that the world’s best-selling electric car will be able to travel up to a claimed 155 miles on a single charge. The latest version of the Leaf is expected to be at this month’s Frankfurt Motor Show, with UK sales starting in December.

The 30kW battery version will be available alongside the existing less powerful 24kW model. The more powerful battery adds around 21kg in weight, but Nissan claims that this is made up for by the increased performance. 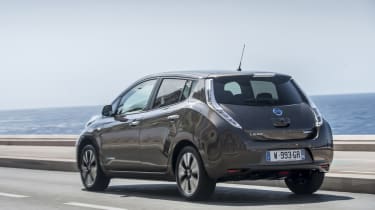 Paul Willcox, chairman of Nissan Europe, said: “A range of up to 155 miles opens the world of EV to thousands of drivers across Europe who before just weren’t completely confident that an EV would work for them.”

The more powerful battery is available on Acenta and Tekna trim levels and adds £1,600 to the Leaf’s asking price. For the full price list, see below.

The introduction of the 30kW battery comes as Nissan updates the whole Leaf range. Whichever battery you choose, the Acenta and Tekna models will now be equipped with the brand’s NissanConnect EV infotainment system.

This replaces the previous ‘Carwings’ system and comes with a seven-inch touchscreen, satellite navigation with specific EV information such as charging-point locations, as well as DAB digital radio. The system also allows you to pre-heat or pre-cool the car, which Nissan claims doesn’t use any battery energy.

Plus, Nissan says that it’s so confident in performance and reliability of the new 30kW battery that it’ll be covered by an eight-year/100,000-mile warranty.

Just like the 24kW version, you can charge your 30kW Leaf at home, at a public charger or at one of around 500 ‘Leaf-compatible’ rapid chargers across the UK. 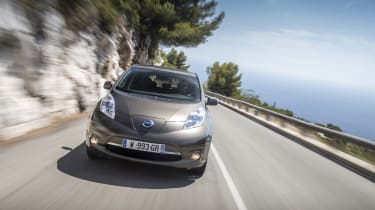 A second-generation model of Nissan Leaf, expected to go on sale in 2017, will be offered in a range of versions. "Expect the next-generation Leaf to mirror any other car, with a wide range of engine options, but ours will all be electric," we were told by a Nissan insider.

Although Nissan hasn't revealed any official information, Carbuyer understands top-of-the-range models will have a range of up to 250 miles. That will become possible with a wider range of batteries, some going beyond the 30kW to be offered from December. 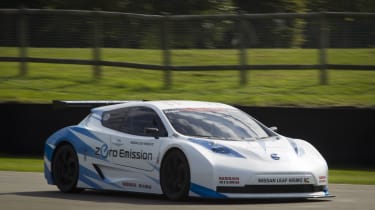 In the five years since the Nissan Leaf first went on sale, more than 35,000 have been sold in Europe. Despite concern among consumers over the life of electric-vehicle batteries, Nissan says Leaf batteries have only failed in three of its models. Nissan also claims the Leaf is 40% cheaper to maintain than petrol or diesel-powered equivalents, due to the comparatively small number of parts in the car's motor and drive unit.

For the full Nissan range, including our Leaf review, check out Carbuyer’s reviews page.