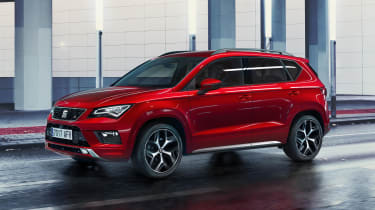 The SEAT Ateca SUV is now available in a sporty FR trim, which will be on display at the Barcelona International Motor Show in May.

Sitting between the SE Technology and range-topping XCELLENCE trims, the FR will emphasise the sharp styling of the Ateca, exchanging some of its SUV design cues for styling accessories more often found on hot hatchbacks. For a start, 18-inch ‘Performance’ wheels are standard, while 19-inch alloys are optional. SEAT has also elected to paint the wheelarches instead of leaving them black; this change, along with side skirts trimmed in aluminium, makes the Ateca appear lower to the ground. 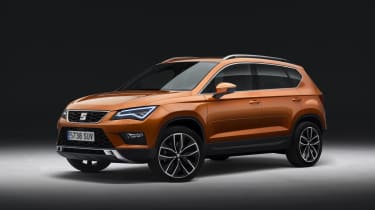 It’s a similar story for the painted bumpers, and around the back there’s also a larger rear spoiler as well as black side spoilers flanking the rear window. Gloss black is also used for the grille, side window trim and roof rails for a more aggressive look.

Inside, there are plenty of FR logos (including the metal door sills), a leather sports steering wheel and figure-hugging seats trimmed in Alcantara, with leather as an option. Red stitching borders much of the interior trim and even the roof liner and door trims are changed to complement the new look.

The Ateca is selling well and the FR is likely to be a popular choice in the UK, but it won’t be available with every engine. You’ll need to choose a petrol or diesel engine with at least 148bhp if you want the FR, and SEAT has also announced a new 2.0-litre TSI petrol will be available with 187bhp. The Ateca FR will available with front or four-wheel drive, while adaptive suspension will also be offered to further sharpen up the suspension or improve comfort as and when the driver chooses.

SEAT is already classing the Ateca as a “smash hit”, with 40,000 sales worldwide in the brief time it has been on sale. The Ateca SUV competes squarely against the Nissan Qashqai, Volkswagen Tiguan, Ford Kuga, Renault Kadjar, Honda CR-V, Kia Rio and Hyundai Tucson, in a market that has exploded in popularity.

The Ateca is available with a choice of turbocharged diesel and petrol engines and there’s a higher performance Cupra version under discussion, in keeping with the tradition of quick variants of the SEAT Ibiza and Leon. It’s also mooted that the range is set to encompass a rugged, off-road biased variant likely to incorporate many of the features displayed in the X-perience concept car revealed at this year’s Paris Motor Show.You can order your Ateca in one of four trim levels – S, SE, FR and XCELLENCE. The entry-level S model starts at £18,150, while the top-spec version is priced from £30,595.

Even though a low entry price means the Ateca undercuts the Nissan Qashqai, SEAT expects most UK buyers to go for one of the higher-spec models.

There are strong hints of the Leon family hatchback in the design of the Ateca. The angular headlamps and sharp creases down the body are reminiscent of the smaller SEAT, although the black plastic cladding (unless you go for the FR trim) and raised ride height mark out the Ateca’s rough, tough off-roading intentions. You also get roof rails, while at the back there are angular light clusters and a roof spoiler. 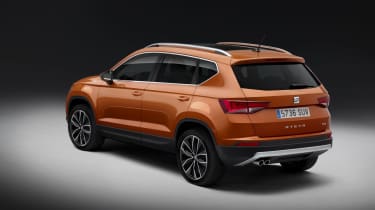 The Ateca is based on the same underpinnings as the Volkswagen Tiguan, so it’ll come as no surprise to learn that it’s almost exactly the same size as that model. Granted, you do lose a tiny bit of boot space compared to the VW, but it’s still pretty generous, at 510 litres (485 if you go for four-wheel drive). That means the Ateca has a bigger boot than either the Qashqai or Kadjar.

If you’re familiar with SEAT, Volkswagen or Skoda products of the last couple of years, then little inside the Ateca will surprise you. There’s the usual five-inch infotainment screen in the dash – more expensive versions get a 6.5-inch – while the dials and steering wheel are all pretty standard Volkswagen Group fare. That infotainment screen is flanked by a couple of air vents, while the general design is very clean, crisp and minimal. Most functions are controlled by the touchscreen, although there are shortcut buttons, too, as well as switches for controlling the air-conditioning. 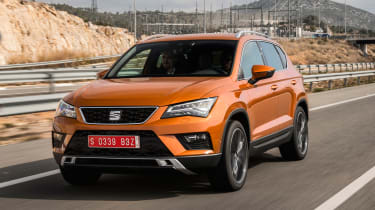 You have a choice of two petrol and three diesel engines for the Ateca, all of which cost £140 in annual road tax. There’s a turbocharged 1.0-litre three-cylinder petrol, producing 114bhp, and a 1.4-litre turbocharged four-cylinder petrol that makes 148bhp. These emit 119 and from 122g/km of CO2 respectively, meaning company-car drivers are liable for Benefit-in-Kind (BiK) of 22% or 23%. A new 2.0-litre TSI petrol engine has also been announced with 187bhp, providing an alternative to the top diesel. 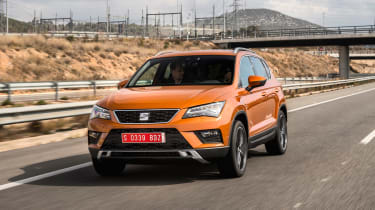 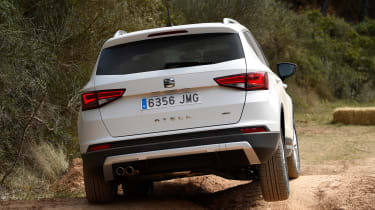 Add four-wheel drive to the 148bhp diesel, however and that jumps to 128g/km, with a resulting hike in running costs, while the most powerful 187bhp diesel (which is only available with four-wheel drive and a dual-clutch automatic gearbox) emits 131g/km of CO2. 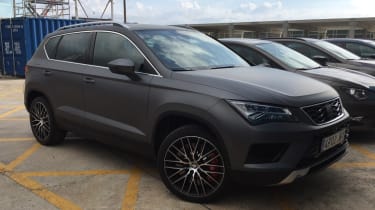 It’s long been rumoured SEAT will build a performance-orientated Cupra version of the Ateca, and recent spy shots indicate that’s less of a rumour and more of a fact. Photographers from our sister publication Auto Express recently spotted a prototype Ateca at a SEAT press event, complete with quad exhaust pipes, huge alloy wheels and powerful Brembo brakes. 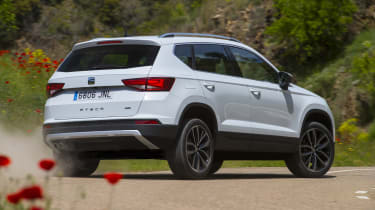 Although full details are yet to be released, the Ateca Cupra is expected to launch next year and should use a turbocharged 2.0-litre petrol engine, producing 300bhp or more. No word on pricing or performance, but expect 0-62mph to take under six seconds and a list price of over £30,000 – the point at which the Ateca range currently tops out.

Four trim levels are offered for the Ateca: S, SE, FR and XCELLENCE. Entry-level models come with air-conditioning, a touchscreen infotainment system, as well as safety kit such as seven airbags, a driver drowsiness detection system and tyre-pressure monitoring.

Move up to mid-range SE trim and you get 17-inch alloys, LED rear lights, dual-zone climate control, a leather steering wheel and rear parking sensors as standard, while the most lavish kit is reserved for the XCELLENCE model. The FR trim has a sportier look inside and out, with features including painted wheelarches and Alcantara sports seats. 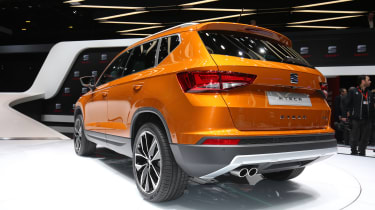 The XCELLENCE trim benefits from the likes of a full leather interior and multi-coloured ambient lighting. On the outside, there are chrome roof rails, a gloss-black front grille, tinted windows and 18-inch alloy wheels. You also get LED headlights, a reversing camera, keyless entry, stop-start technology and the SEAT Drive profile system, which allows you to choose between three different driving modes. The XCELLENCE also has automatic lights and rain-sensing wipers.

FR models have a black grille, roof rails and side window surrounds, along with a larger rear spoiler and a spoiler at either side of the rear window for enhanced aerodynamics. The interior gets a makeover too, with a sports steering wheel, and red stitching for the leather trim, along with plenty of FR badges.

The limited-run First Edition models – of which only 200 came to the UK – had an extra £3,500 worth of standard equipment for just £1,000 more than the standard SE’s price. This includes 18-inch alloy wheels, sat nav, keyless entry, a powered tailgate, rear parking sensors and a reversing camera. There are also tinted rear windows, as well as black window surrounds and black roof-rails. 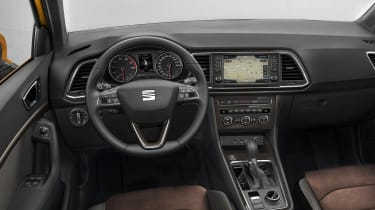 The First Edition was priced from £21,995 or £24,305 depending on whether customers went for the 113bhp 1.0-litre turbocharged petrol engine or the 113bhp 1.6-litre diesel. Customers also had a choice of three colours: Nevada White, Rodium Grey or Samoa Orange.

SEAT has positioned itself as the 'youthful' brand in the Volkswagen Group's portfolio and, as such it places a lot of emphasis on incorporating smartphone connectivity and new technologies into its cars. The new Ateca is no different.

It's available with the Media System Plus infotainment set-up, which is controlled from an eight-inch touchscreen and combines with the rest of the car's connectivity technology to make the Ateca one of the most 'connected' cars available.

This includes the Connectivity Box under the centre console, which includes wireless phone charging, two USB ports and mobile phone signal boosting through the car’s on-board antenna. The Ateca is also fully compatible with Android Auto, Apple CarPlay and MirrorLink, meaning you’ll be able to control your phone from the car’s touchscreen.

Owners are also able to download the SEAT ConnectApp, which, through the MirrorLink connection, allows the Ateca to read out text messages, e-mails and social media updates, while you can also dictate responses. This system will also have gesture control, which means you can control certain functions by making a simple hand gesture rather than touching a screen or button. 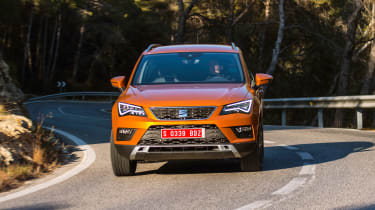 The Ateca also comes with plenty of driver-assistance technology. You can specify features such as traffic-jam assist, which can autonomously control the car in traffic at speeds up to 37mph. This works in conjunction with the active cruise control, which can keep a set distance to the car in front.

Traffic-sign recognition is also available, alerting you to certain signs by the side of the road – as well as blind-spot monitoring, which tells you if there’s a car in your blind spot on the motorway. Rear cross-traffic assist, meanwhile, will tell you if it’s safe to reverse out of a parking spot.

Also available is a top-view camera system that uses four cameras around the outside of the car to give you a bird’s-eye view, making manoeuvring in tight spaces easier. You can also specify SEAT's third-generation park assistance system, which will autonomously manoeuvre the Ateca into parallel or perpendicular parking spaces, with you only controlling the pedals.

Lastly, there are also lane-keeping and emergency assistance systems. The former can keep the car in a specific lane on the motorway, while the latter will stop the car safely if it detects you're nodding off at the wheel. 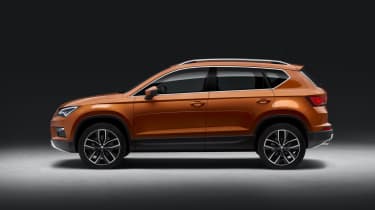 Another SEAT SUV, smaller than the Ateca and called the SEAT Arona will be based on the SEAT Ibiza supermini. It will arrive ahead of a large seven-seat SEAT SUV, which shares the same underpinnings as the Volkswagen Tiguan Allspace and Skoda Kodiaq, with the possible nameSEAT Formentor, according to rumours.

There have also been hints that a SEAT Ateca Cupra performance version could be on the way. The existing SEAT Leon X-perience – a more rugged, raised-up version of the SEAT Leon ST estate – will end up sitting between the latter car and the larger, more off-road-capable Ateca – of which a more off-road centric X-perience version is almost certain to arrive – in the range.