Kia expands the Optima range with the introduction of a plug-in hybrid and Sportswagon estate, performance GT model to launch shortly. 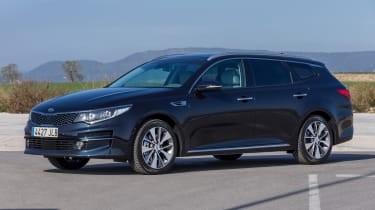 The PHEV and Sportswagon made their European debuts at the Geneva Motor Show back in March, while a powerful 242bhp Optima GT is also likely to be launched this year; this should bring a much-needed dose of power to the Optima range. We drove the Optima Sportswagon and the Optima saloon PHEV recently, and were impressed the comfort offered by both – although we look forward to the sportier GT model to find out if this makes the Optima more of a driver’s car.

The Kia Optima Sportswagon estate goes on sale in September, and is expected to be the biggest seller in the range. The Sportswagon’s sloping roofline, wraparound rear lights and distinctive front-end clearly show the influence of the stylish Kia Sportspace concept from 2015.

While these good looks comes at the expense of some practicality – the Optima Sportswagon’s boot is about 100 litres smaller than that of the Volkswagen Passat and Skoda Superb estates - a low boot floor with hidden storage compartments mean the Sportswagon is an estate car at heart. Rear seats that fold down by pulling a lever in the boot together with luggage hooks, cubbyholes and optional storage covers complete the Sportswagon’s complement of practical equipment. 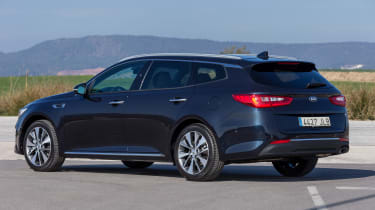 Despite costing about £700 more than the saloon, Kia expects to sell six or seven Optima Sportswagons for every saloon bought. With estates selling in big numbers these days, Kia will be glad to offer credible alternative to the VW Passat, Skoda Superb and Ford Mondeo estates.

The Optima Sportswagon is likely to be priced from £22,200; this is slightly more than a comparable Skoda Superb estate, but the Sportswagon’s list of standard equipment and Kia’s seven-year warranty justify its price.

The Kia Optima Sportswagon will only be available with the same 1.7-litre diesel engine currently seen in the saloon, with a plug-in hybrid model possibly being added at a later date. Sportswagon customers will have the choice of a six-speed manual or Kia’s new seven-speed dual clutch automatic gearbox. 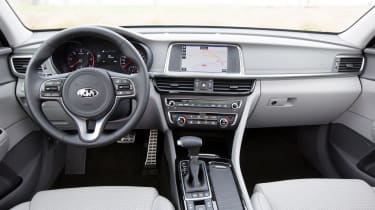 In all versions of the Optima, Kia has taken a leap forward in terms of interior quality and design. The seven or (optional) eight inch touchscreen dominates the dashboard, while high-quality soft-touch plastics dispel memories of the less-impressive cabins from Kias of old – although look closely enough and you’ll find cheaper materials lower down in the Optima’s interior.

Technology has been a key focus for Kia in the development of the new Optima models: all will be available with an Autonomous Emergency Braking system, and Kia also offers up-to-date infotainment options like Apple’s CarPlay and Android Auto, as well as wireless phone charging.

The Optima PHEV is powered by a 2.0-litre petrol engine paired with a 50kW electric motor, producing 202bhp between them. The extra weight of the batteries means the Optima PHEV is no sports car, although it is marginally quicker than the standard diesel, taking 9.1 seconds to go from 0-62mph. One welcome aspect of the Optima PHEV is that it features a conventional automatic gearbox, rather than the unpleasant CVT automatic found in many hybrid models. 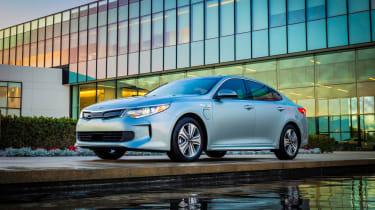 Perhaps more impressively, the Optima PHEV can cover 33miles in electric mode at speeds of up to 75mph and, while its claimed economy of 176.6mpg will be hard to achieve in real-world driving, its low CO2 emissions means it attracts a rock-bottom Benefit-in-Kind rate of just 7%. This should make the Optima PHEV a strong prospect for company car drivers, although given the Optima PHEV’s high asking price of about £31,500 (after the Government’s plug-in vehicle grant is taken into consideration), it’s pitched perilously close to the superior BMW 3 Series 330e hybrid.

When it's launched towards the end of 2016, the plug-in hybrid will feature Android Auto as standard, with Apple CarPlay following shortly after before the end of the year.

If you favour power over economy, the Optima GT is set to go on sale shortly after the PHEV and the Sportswagon. The GT's 242bhp turbocharged 2.0-litre petrol engine will give the Optima a much-needed dose of performance, as the saloon’s 1.7-litre diesel engine provides reasonable power, but it far from being fast.

The GT model should make the Optima a far more desirable car, particularly for drivers who like to have a bit more overtaking power on the motorway.