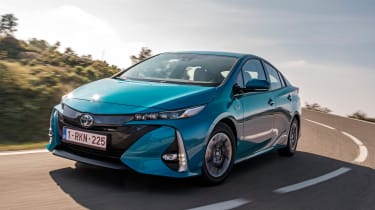 The new Toyota Prius Plug-In is available to order now and prices start at £34,895. First revealed at the New York Motor Show last year, the new plug-in version of the Prius boasts significantly better efficiency, EV range and charging time than its predecessor.

With headline figures of 283mpg economy and 22g/km CO2 emissions, the new plug-in Prius is significantly more efficient and cleaner than both the outgoing model and the current standard Prius. Rivals include the Volkswagen Golf GTE and Audi A3 e-tron. According to the official figures, the super-efficient Prius has the beating of both of them when it comes to running costs.

That 22g/km CO2 figure is important, because not only does it exempt the Prius from the London Congestion Charge, it also means you won’t pay road tax (as long as your car is registered before new rules come in on 1 April). The Prius Plug-In is eligible for a Government plug-in car grant of £2,500 and is likely to prove popular with company-car buyers thanks to its 7% Benefit-in-Kind (BiK) tax rating.

According to Toyota, the new car can drive for more than 30 miles on electric power alone and can manage speeds of up to 84mph in this mode, while the recharging speed of the battery has been improved by 65%, so a full charge now only takes two hours.

The 8.8kWh lithium-ion battery has twice the capacity of the battery in the previous Prius Plug-In and powers an electric motor linked to a 1.8-litre petrol engine. The hybrid system’s maximum output is 121bhp, resulting in a 0-62mph time of 11.1 seconds.

Styling-wise, there have been a few changes made to the car compared to the standard Prius, with new headlamp clusters and a redesigned front bumper compared to the standard model. At the rear of the car, there’s a completely different light signature, while the main light clusters are completely different from those of standard car. Both the front and rear lights are all-LED, too. 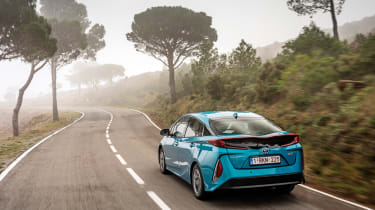 The Prius Plug-In has been designed to be even more aerodynamically efficient than the standard car, to help it slip through the air more easily, while other technology such as a battery-powered heating system and gas-injection air-conditioning all help it to use the petrol engine as little as possible.

The larger battery under the rear seats has affected the car’s practicality. It’s now a strict four-seater, with the centre console running the length of the interior, and the boot has shrunk to 360 litres from 502 litres in the previous model.

The Excel model has extras including rain-sensing wipers, front and rear parking sensors, an upgraded stereo and leather upholstery.

In a world first, Toyota has made the Prius Plug-In available with an optional solar roof that can act as an additional power source. It captures energy from the sun when the car is parked and uses it to recharge the battery for the motor.

The plug-in Prius also comes with Toyota’s ‘Safety Sense’ system, which includes features like pre-collision with pedestrian detection and autonomous emergency braking. This allows the car to effectively avoid crashes at low speeds, while it also features adaptive cruise control and lane-keeping assistance, which will automatically keep the car in its lane on the motorway.

The new Prius Plug-In is available to order now, with first deliveries scheduled for 1 March. Prices start at £31,695 for the Business Edition Plus and £33,895 for the Excel. 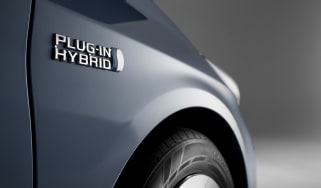 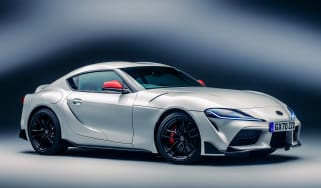