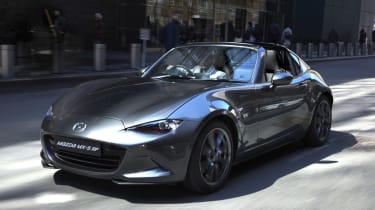 It features a central roof panel that slides under the rear bodywork at the touch of a button. The previous hardtop MX-5, the MX-5 Roadster Coupe, stored the entire roof in the car’s boot. The RF keeps the rear windscreen up when the roof is down.

It is not yet known if the Fiat 124 Spider - the MX-5's sister car - will gain the new roof arrangement.

The new Retractable Fastback is unlike any previous MX-5, as it’s not a full open-top convertible. The concept is similar to that of the Porsche 911 Targa, with the rear windscreen and bodywork lifting up to allow the roof panel to be stored, then lowering into place again. 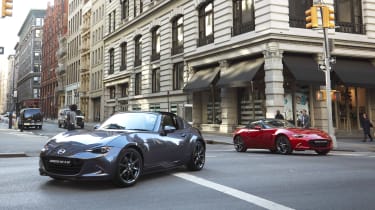 A button on the dashboard activates the electrically powered transformation, which can be made at speeds up to 6mph and takes 12 seconds to complete. Mazda says the MX-5’s boot capacity hasn’t been reduced in the RF, which is a good job since was only 130 litres in the first place.

The roof and rear wheel housings are fitted with sound insulation material and Mazda claims the interior is “significantly quieter” as a result.

Contrasting colours will be available for the roof panel, but you’ll also be able to have it in the same colour as the rest of the car. There’s no official word yet on how much heavier this version is compared to the regular, soft-top MX-5, but Mazda says the car’s power steering has been modified to take account of the extra weight.

The Mazda MX-5 RF will feature the same 129bhp 1.5-litre and 159bhp 2.0-litre petrol engines as the soft-top and performance is likely to be close to the standard car, although no weight figures have been revealed. That means the engines are likely to achieve 0-62mph times of around 8.5 seconds and 7.5 seconds respectively.

The car will be offered with a six-speed manual gearbox as standard, but for the first time in this generation of MX-5 an automatic gearbox will also be available, in Sport Nav Auto version.

Cars with the 2.0-litre engine have a grip-enhancing limited-slip differential and 17-inch wheels. 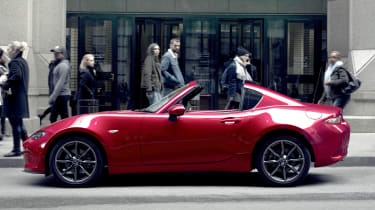 Just 500 Mazda MX-5 RF cars will initially be available, all in Launch Edition trim with the 2.0-litre engine. The limited-edition cars will feature a two-tone roof, BBS wheels, black door mirrors and a rear spoiler, while the interior is trimmed with Alcantara suede fabric and fitted with Recaro seats. Also added is a Safety Pack including a feature that alerts you to traffic about to cross your path as you reverse. Buyers can choose between Soul Red or Machine Grey metallic paint. 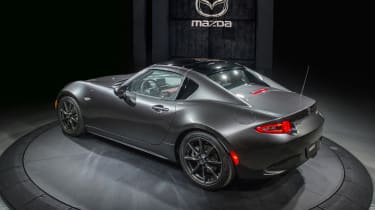 Mazda MX-5 RF models fitted with the 2.0-litre engine will go on sale on 4 March 2017, with 1.5-litre version arriving in May. All are available to pre-order now.