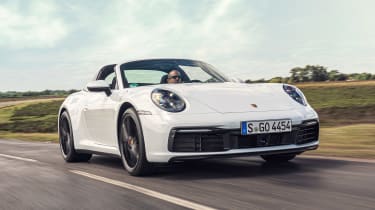 The Porsche 911 Targa sits between the Coupe and Cabriolet models in the 911 line-up, offering an opening roof panel and a distinctive, stylish look.

Named after the historic Targa Florio road race, the 911 Targa remains a niche choice but has a dedicated following according to Porsche, accounting for around 20% of 911 sales. It has the same 2+2 seating layout as the Coupe, and offers slightly better refinement than the Cabriolet.

It's only offered in 4 and 4S versions, both of which are fitted with Porsche's 3.0-litre flat-six turbo petrol, four-wheel drive and an eight-speed dual-clutch automatic gearbox. Power is 380bhp and 444bhp respectively, so both are quick, getting from 0-62mph in well under five seconds. Weighing over 1,700kg, the latest Targa is one of the heaviest versions of the 911 in the model’s history, but clever adaptive suspension does a good job of coping, so the Targa is still great to drive. 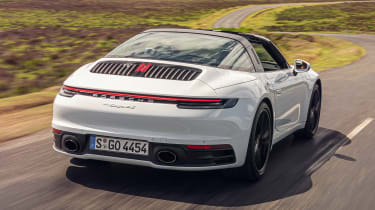 The Targa is expensive, though, costing almost £10,000 more than the equivalent Porsche 911 Carrera 4, and refinement with the roof down isn't much better than the Cabriolet.

Around 27mpg is respectable for a 190mph drop-top

While it's hardly in contention for any green awards, 911 Targa owners are likely to find running costs acceptable. Fuel consumption of up to 26.9mpg isn't too bad for a 380bhp sports car with an open top, after all. Oddly, the more powerful Targa 4S manages up to 27.2mpg, so buyers won't need to choose the lower-powered version for its fuel-efficiency. 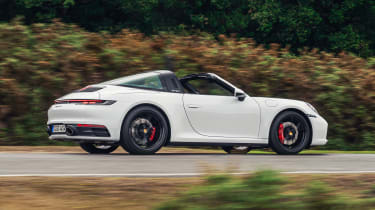 CO2 emissions of around 240g/km put the Targa firmly in the top Benefit-in-Kind band for company-car drivers, but annual VED is the same £150 as most other cars. That's after payments of £475 in years two to six, owing to the Porsche costing over £40,000.

Great to drive but Targa’s extra weight is noticeable

Two versions of the 911 Targa are available in the UK: the Targa 4 and Targa 4S. The first gets 380bhp, four-wheel drive and an eight-speed automatic transmission, which is enough to propel the 1,750kg sports car from 0-62mph in 4.2 seconds. The more powerful version of the 3.0-litre flat-six in the 4S has 444bhp, bringing the Targa’s acceleration time down to 3.8 seconds, or two-tenths less with the optional Sport Chrono pack fitted. It can top out at 189mph. 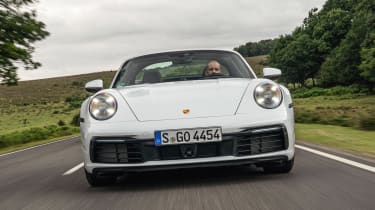 The Targa's steering wheel is pleasingly clean and simple, with just a small round control wheel allowing the driver to switch between drive modes quickly and effortlessly without having to search through any menus. In its most laid back setting, the 4S is comfortable and refined, with a fairly quiet engine even with the roof open. Sport and Sport+ make the ride firmer, the steering sharper and give the adaptive chassis closer control of the Targa's considerable mass. 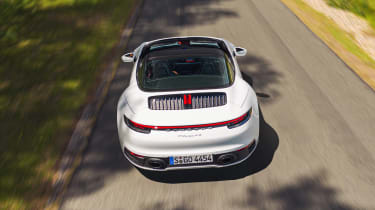 The exhaust becomes more vocal in Sport too, although new emissions regulations mean the latest 911s don't sound quite as epic as older ones. Braking is taken care of by 350mm front and rear disc brakes in the 4S, with red painted calipers. Ceramic brakes are available as an optional extra if you plan on taking your 911 Targa on track regularly.

A pop-up wing smooths airflow over the occupants

The Targa's roof is operated electrically, opening and closing in less than 20 seconds. Once open, a small winglet pops up at the top of the screen to help smooth airflow around the interior. It's clearly effective,because if you mistakenly lean on it when getting in or out of the car and push it back in, there's serious wind buffeting, even when driving around town. 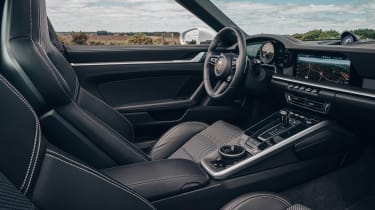 An interior carried over from the regular 992 means quality and design are excellent. The 4S is fitted with a large 12-inch touchscreen, replacing many of the buttons found in earlier Porsche models. It feels expensive, with slick graphics, intuitive menus, Apple CarPlay and Android Auto. TFT displays at the side of the instrument binnacle don't work as well, though, as they’re partially obscured by the steering wheel.

The 911 Targa represents an interesting middle ground between the Coupe and Cabriolet, offering some extra security and refinement over the Cabriolet, while still allowing the top to open. The Targa retains the 2+2 layout of the hardtop making it possible to carry kids, although they may complain on a hot day, because the rear screen creates something of a greenhouse effect. The back seats are also handy for shopping and soft bags. 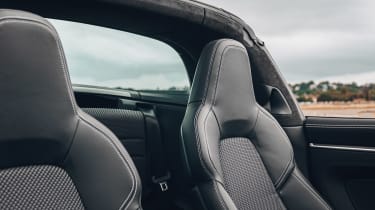 Thanks to its famous rear-engined layout, the 911 benefits from a 132-litre 'frunk' under its bonnet, which combines with a 163-litre rear boot. The latter is quite a bit smaller than the 264-litre boot of the 911 Coupe, and identical in size to the Cabriolet. For comparison, the Jaguar F-Type Convertible has a single 200-litre boot, while the Audi R8 Spyder offers a meagre 112-litre frunk.

It may not have been tested by Euro NCAP, but the Porsche 911 has racing pedigree

Euro NCAP don't tend to crash test sports cars like the Porsche 911 Targa, due to their cost and relatively low sales volumes, but Porsche's motorsport pedigree should reassure owners their cars are hugely strong. Comprehensive safety kit is also available, including autonomous emergency braking that can detect pedestrians and cyclists along with other vehicles. An optional night vision camera is offered. 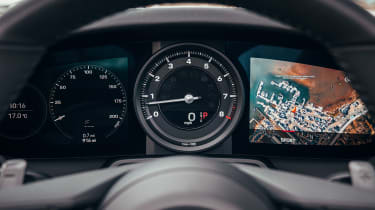 Reliability should impress too. Rather like the performance equivalent of the Volkswagen Golf, the Porsche 911 has evolved over numerous iterations, with niggles and design flaws ironed out with each one. Often these advances have come on track, as endurance racing ruthlessly finds any weak components. The 911 even has surprisingly long servicing intervals for such a fast car, requiring attention every 20,000 miles or two years, which are bigger intervals than most family cars. 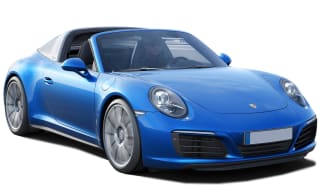 "The Porsche 911 Targa isn't quite as much fun to drive as the coupe, but it's still a driver's car and costs the same as the Porsche 911 Cabriolet"
New Porsche 911 Turbo & Turbo S: prices, specs and release date 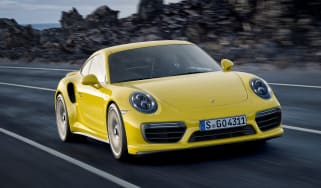 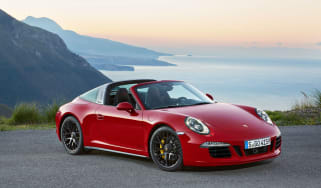