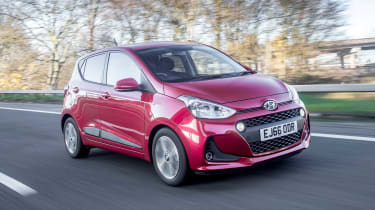 Prices and specifications for the revised Hyundai i10 have been announced for the UK market as the car goes on sale. New i10s are in dealerships now and orders are being accepted.

As well as some subtle styling changes, the new i10 features better connectivity options as well as more safety kit and some alterations to the steering and suspension for a more involving drive. 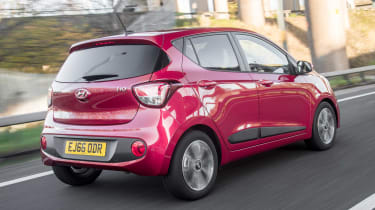 The engine range is unchanged, however, with customers having a choice between a 65bhp 1.0-litre three-cylinder petrol or an 86bhp 1.2-litre four-cylinder petrol. All cars come with a five-speed manual gearbox as standard, while those with the more powerful engine can be had with a four-speed automatic transmission as an option.

This puts it up against rivals like the Skoda Citigo, Kia Picanto, Vauxhall Viva, SEAT Mii and Volkswagen up!

Most of the styling changes on the new Hyundai i10 are at the front, with a new, larger, ‘cascading’ front grille – a feature that’ll be rolled out across the Hyundai range over time – and a reprofiled front bumper.

Elsewhere, the LED daytime running lights have been moved from the front air intakes either side of the front bumper to within the front grille. They’re also now circular rather than L-shaped.

You’ll also be able to choose from new designs of 14-inch steel and alloy wheels, while the SE Blue model gets eco-friendly 13-inch steel wheels.

Inside, there are now more connectivity options, with the addition of Apple CarPlay and Android Auto compatibility on the top-spec Premium SE model.

These allow you to operate certain functions of your Android or Apple smartphone from the i10’s new seven-inch infotainment touchscreen. This also includes sat nav and a seven-year subscription to LIVE Services, which includes real-time traffic updates, weather reports and up-to-date speed-camera locations, as well as local points of interest. 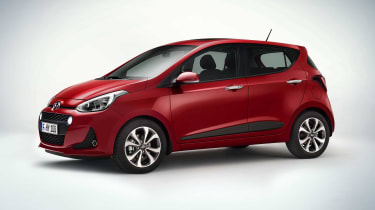 There’s also a significant increase in the amount of safety equipment on the i10. This includes a multi-function camera incorporating two new features – a front collision warning system and lane-departure warning.

The first system uses the front camera to detect possible frontal collisions and alerts you both visually and audibly if the car is travelling at more than 37mph. The lane-departure warning also works at speeds above 37mph and alerts you if the car crosses lane markings without you indicating.

These are, however, only available as part of an option pack – and not at all on the entry-level S version.

You get a choice of five different trim levels on the revised Hyundai i10 – S, SE, SE Blue, Premium and Premium SE.

The entry-level S – which is priced from £9,250 – is only available with the less powerful 65bhp 1.0-litre three-cylinder petrol engine. It comes with 14-inch steel wheels, a boot spoiler with an integrated third brake light, electric front windows and remote central locking as standard.

Move up to SE (from £10,500) and you get body-coloured door handles and mirror caps, as well as heating and power-adjustment for those mirrors. Inside, you get air-conditioning, cruise control, Bluetooth and DAB radio as standard, as well as the no-cost option of red or blue interior trim pieces. 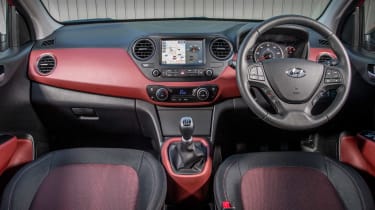 You can also add the Driver Assist Pack to the SE for an extra £275. This includes lane-departure warning and forward collision warning. All subsequent trim levels can be specified with this as an option, too.

For an extra £400, you can have SE Blue trim, which is almost identical to SE, but concentrates on reducing running costs as much as possible. To this end, it gets stop-go technology, a weight-saving four-seat interior layout and 13-inch wheels.

Next up is Premium trim, which starts at £11,200. Cars in this specification come with 14-inch alloy wheels, LED daytime running lights and climate control, as well as a leather steering wheel and gearknob. These i10s also come with a smartphone docking station, so your smartphone can act as an infotainment system.

At the top of the range is Premium SE, prices for which start at £12,800. In addition to everything you get on the Premium, this version gets extra toys like a seven-inch touchscreen infotainment system, which includes sat nav and DAB radio. You also get access to the LIVE services detailed above, as well as Apple CarPlay and Android Auto compatibility. 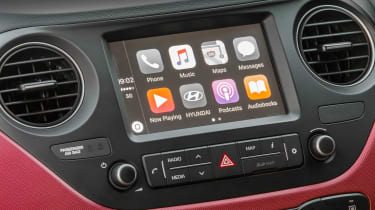 Unlike other manufacturers, there isn’t an extensive options list to choose from. In fact, there’s only the aforementioned Driver Assist Pack for an extra £275 and a choice of metallic or pearl paint colours for an extra £550.

Hyundai has tweaked the i10’s suspension and steering slightly with the aim of a more engaging drive, while the engine range is unchanged. There’s a choice of 65bhp 1.0-litre three-cylinder or 86bhp 1.2-litre four-cylinder petrol power.

That means running costs are unchanged, too, with the i10 still returning between 45.6 and 70.6mpg, while road tax will set you back anywhere between nothing – if you go for the SE Blue model – and £145 if you go for the top-spec automatic version, thanks to CO2 emissions that range from 93 to 139g/km. 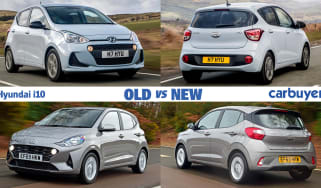