Golf prices reveal savings of up to £3,420, new driver-assistance tech and ‘gesture control’ 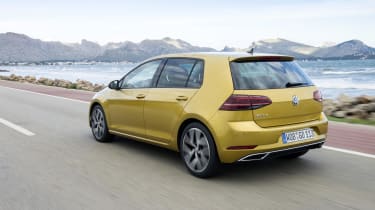 The new Volkswagen Golf GTE will be £3,420 cheaper than the previous model. The cheaper-than-before pricing structure mirrors the rest of the Golf range.

The price ‘realignment’ follows the news that the majority of the new Golf range is cheaper than the previous model.

The new entry-level 1.0-litre engine with 84bhp is more economical than the similarly powerful 1.2-litre it replaces. Plus, a new 1.5-litre turbocharged petrol engine will arrive later in 2017.

Take a look at the Golf’s equipment list and many features will be more familiar with buyers of executive models, as Volkswagen aims the facelift at “democratising quality and value”, and bringing a “major update” to the car.

Technology including active cruise control and a system that effectively takes full control of the car in traffic jams, meaning the Golf can offer semi-autonomous driving. There’s also a digital dashboard in place of traditional dials and you even can use hand gestures near the dashboard to alter the stereo volume and accept calls.

While some of these options are, of course, fitted to higher trim levels or cost extra, even the most basic Golf now gets LED rear light clusters, air-conditioning and a six-inch touchscreen infotainment system.

Current admirers of the VW Golf shouldn’t have any issues with the latest makeover, which only gets a subtle shake-up. It’s more a case of new components, with some Golfs now getting LED headlights and a new design for the LED daytime running lights, which are built into a reprofiled bumper and with new ducts to provide the engine and brakes with cool air. 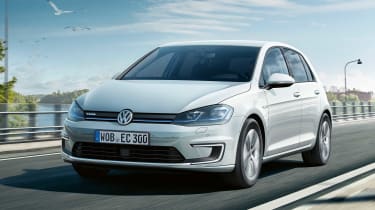 The chrome grille strip is even wider than before and is coloured silver for the standard model, red for the GTI and blue if you choose the GTE plug-in hybrid. The sensors that scan ahead for the adaptive cruise control and autonomous emergency braking have now been hidden more effectively behind the VW badges, too.

Full LED rear light clusters mark the biggest design change at the back, with ‘sweeping’ indicators on top versions, which have previously been seen only on Audi models. The exhaust tailpipes have also been integrated into the rear bumper.

Inside is where the biggest changes to the Golf have taken place, with a reduced button count and a wealth of user-friendly technology. This includes gesture control, where sensors and cameras interpret specific hand signals to control aspects of the infotainment system, as well as the sunroof and temperature settings.

This will only be available on Golfs equipped with the top-of-the-range Discover Pro infotainment system, which includes a 9.2-inch touchscreen with a customisable home screen. It’s standard in the e-Golf electric version, where it aptly reflects the high-tech nature of that car. 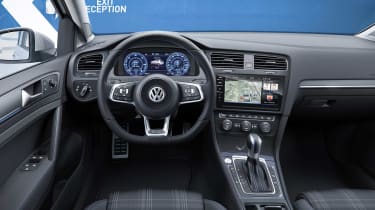 This is the first time such advanced technology has been offered in a mainstream family hatchback, with these features previously the preserve of luxury saloons; the latest BMW 5 Series, for example, is offered with such a system.

The new Golf is also available with advanced connectivity features such as on-board internet and wireless mobile-phone charging, as well as Apple CarPlay, Android Auto and MirrorLink compatibility.

Volkswagen’s version of Audi’s Virtual Cockpit digital instrument screen is also available as an option. This allows you to display information on a 12.3-inch TFT screen behind the steering wheel, which sits in place of traditional analogue dials.

The Active Info Display allows you to choose from five modes, focusing on, for example, economy, navigation or performance. It can also display mobile-phone contacts, album artwork and driving assistance information. If you go for a Golf GTI or Golf GTE, it comes in a contrasting background colour – red for the GTI and blue for the GTE plug-in hybrid. 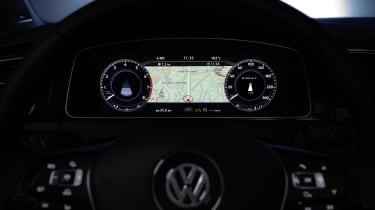 Also available with the new Golf is what Volkswagen calls the ‘Security & Service’ package. This will alert the emergency services in the event of a serious collision and can also send the car’s location to recovery services if it breaks down.

You’ll be able to monitor certain things about the car, such as when it’s due a service, whether the lights are on, if it’s locked and where it’s parked. Parents may be interested to know the system can also notify you via a smartphone app if a certain speed has been exceeded, or if the car is driven in or outside of specified areas.

As well as hi-tech infotainment, the new Volkswagen Golf is available with a number of innovative driver-assistance systems. These include traffic-jam assistance, which is only available on cars equipped with the DSG dual-clutch automatic gearbox. It works with the adaptive cruise control and lane-keeping assistance to drive the car autonomously in stop-go traffic. It keeps the car in lane and stops it hitting the vehicle in front, which it’ll follow.

The 2017 Golf is also available with a system called Emergency Assist, which can automatically stop the car under certain circumstances. For example, it can detect if you’re incapacitated at the wheel and will bring the car to a controlled stop if you’re not making inputs. It’ll only do this if you ignore a number of escalating alerts, however.

Next up are Front Assist and City Emergency Braking. This can detect an impending collision and will bring the car to a stop if you do nothing to avoid it. A new pedestrian detection system can identify a possible collision with a pedestrian, as well as other cars and solid objects.

Lastly, the revised Golf is available with a system called Trailer Assist. This can autonomously steer the car and a trailer during a reverse-parking manoeuvre. You choose the spot, engage reverse gear and operate the brake and accelerator pedals while the car performs the appropriate steering inputs itself.

The majority of the Golf’s engine range is unchanged, with the same line-up of turbocharged petrols and diesels on offer as before. The most significant change is a new 1.5-litre turbocharged four-cylinder petrol engine that manages 128bhp in BlueMotion guise and 148bhp in standard tune.

Fans of the high-performance Golf GTI, meanwhile, will be pleased to hear it’s be given a boost in power, now producing 227bhp as standard instead of 217bhp.

All versions of the new Golf registered after 1 April will cost £140 a year to tax. If you try really hard with the options list, though, it’ll be possible to specify the powerful Golf R past the £40,000 mark. At this point, an additional £310 annual tariff is added for the first five years of the car’s life, making your total road-tax outlay £450. 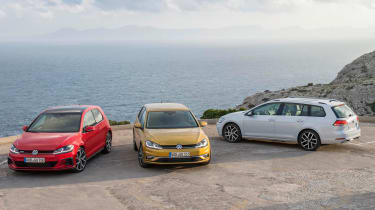 If you’d rather your car produce no CO2 emissions at all, the electric e-Golf is now a far more practical proposition thanks to improvements to its range and performance. While its official range is 186 miles as measured using the NEDC (New European Driving Cycle), the real-world driving range has been calculated at 125 miles on American EPA (Environmental Protection Agency) tests. The 0-62mph time has also been reduced to 9.6 seconds from the previous 10.4 seconds, while top speed is now 93mph – sufficient for most journeys.

A full charge of the e-Golf’s enlarged 35.8kWh battery takes six hours using a supplied wall box, although an emergency charge to 80% can be performed at a rapid-charging point, examples of which can be found in increasing numbers in the UK. As the e-Golf emits no CO2, even examples registered under the new system will enjoy zero annual road tax.

It’s becoming more and more prevalent in the new-car market and personalisation is a key component of the new Volkswagen Golf. You’re able to customise various aspects of the car, such as the seat position, cruise-control settings, ambient lighting colours, infotainment settings, climate settings and various safety systems. This information is stored in user profiles, which, when activated, automatically set the car up to your preferences. These can be stored in the key as well as the infotainment system itself.

Along with the standard hatchback and estate, the Golf GTI hot hatchback has been revamped, with the main change being a small increase in power from its 2.0-litre turbocharged four-cylinder petrol engine. The standard GTI now makes 227bhp (the same as the current car equipped with the Performance Pack), while the revised Performance Pack version has been boosted to 242bhp.

A mid-range five-door Golf in SE trim with a 1.4-litre petrol engine will set you back £20,070, while a diesel version in the same specification will be £21,175. The GTI range starts at £27,865. Order books for the facelifted Golf are open now.