Shared underpinnings with Peugeot 3008 and Citroen C5 Aircross for Vauxhall’s largest SUV, which starts at £22,310 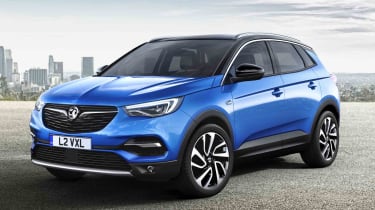 Prices have been revealed for the Vauxhall Grandland X, a new SUV that – if the Mokka X is anything to go by – will be a popular car.

Vauxhall is pricing the Grandland X from £22,310, pitching it squarely at potential Peugeot 3008 buyers, but above the Nissan Qashqai, which starts at around £19,000.

That might sound ambitious, but Vauxhall takes a similar approach with the smaller Crossland X, which is more expensive than some rival SUVs, but comes better equipped.

Tech Line Nav also sees the fittment of a new fatigue warning system from Vauxhall, which will warn you if it senses the car is being driven in a manner indicative of a tired or inattentive driver.

Those after a plusher Grandland X will be drawn to the Sport Nav model, which is priced from £24,595, while top-spec Elite Nav starts at £26,660, but brings LED headlights, 19-inch alloy wheels and leather seats.

The Grandland X will compete with other mid-size SUVs such as the Nissan Qashqai, SEAT Ateca and Kia Sportage. It’s based on the same ‘EMP2’ platform that forms the basis of the Peugeot 3008 and Citroen C5 Aircross.

Compare the Grandland X side-by-side with the 3008 in particular and it’s clear the two cars are related. From the front, however, they couldn’t look much different, with the Vauxhall paying homage to the Astra and Insignia Grand Sport, and the French cars coming with the styling cues typical of their respective manufacturers. 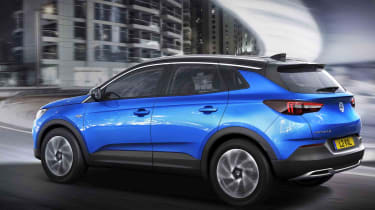 The Grandland X will sit above the Vauxhall Mokka X and Vauxhall Crossland X in the manufacturer's range, and at 4.48 metres long, it's 20cm longer.

It’s a similar story inside; while the C5 Aircross and Peugeot 3008 have somewhat avantgarde dashboard designs, the Grandland X plays it safe, closely resembling the Astra and Insignia. That’s not necessarily a bad thing, though, as while one might want for a little more flair, the heating and ventilation systems in the Grandland are controlled with physical knobs, rather than the touchscreens found in its French counterparts. Interior space in the five-seat SUV looks good, even if the Grandland X’s 514-litre boot is over 10% smaller than the 3008’s, although it grows to 1,652 litres with the seats folded. 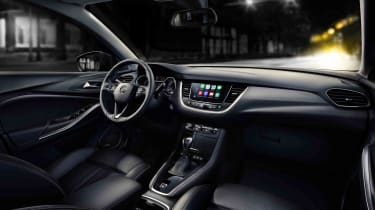 The Grandland X will be offered at launch with a 128bhp turbocharged 1.2-litre petrol engine and a 1.6-litre diesel with 118bhp. Both are available with a six-speed manual or automatic gearbox, with Vauxhall charging £1,500 to make the shift to auto. The Grandland X will be front-wheel drive by default, with those after extra grip having to settle for a optional sophisticated traction control system called Grip Control.

Citroen has confirmed the Aircross will be offered as a four-wheel-drive 300bhp plug-in hybrid, so it’ll be interesting to see if the Grandland X gets a similar setup further down the line.

The Grandland X will also be available with ergonomic front seats, a heated steering wheel and front and rear seats, wireless charging and a bootlid that can open when you wave your foot under the bumper. The latest version of Vauxhall’s OnStar concierge service will be standard, too – allowing drivers to book hotel rooms and search for parking spaces.

The Grandland X will be unveiled in the metal at the Frankfurt Motor Show in September. It’ll be priced from £22,310, and first deliveries are expected in early 2018.