The new Mercedes E-Class Coupe will offer four engines, four-wheel drive and economy of up to 70mpg 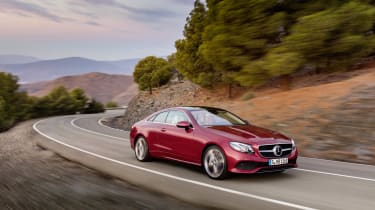 The new Mercedes E-Class Coupe will be officially unveiled at the Detroit Motor Show next month, but we bring you all the details ahead of that. The E-Class Coupe is mechanically similar to the E-Class saloon, but offers sleeker, more streamlined looks, frameless windows and just two doors. 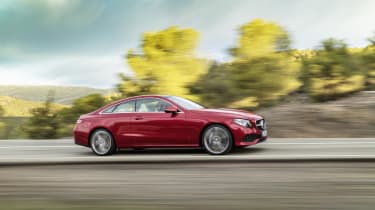 Mercedes claims the new E-Class Coupe will “comfortably” seat four people, while also offering “refined driving pleasure”. Buyers will be offered the choice of two petrol engines and one diesel initially, with the top-of-the-range E400 getting four-wheel drive as standard.

As is to be expected, the new E-Class Coupe follows Mercedes’ latest design language. Its tapered boot and rear evoke the more expensive S-Class Coupe, while following the cues set out by the smaller C-Class Coupe. It’s a similar story at the front, where Mercedes’ familial lines are also clear to see. LED running lights and headlights, strakes in the lower air vents and a pronounced three-pointed star leave no doubt as to the E-Class Coupe’s provenance – not to mention its prominence. 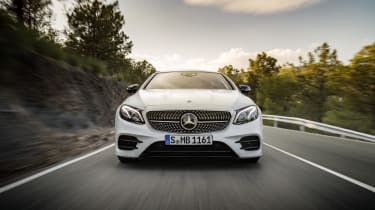 Inside, we can see the Coupe’s design closely follows the E-Class saloon’s, with higher-spec models getting two huge 12.3-inch digital screens; one of these sits in place of the traditional analogue speedometer and rev counter. 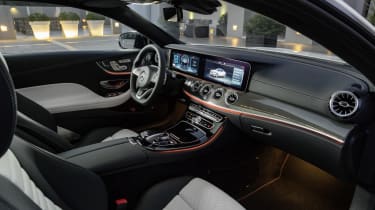 The distinctive, silvered round air vents of the saloon are also present, but in the Coupe these benefit from a more intricate, spindled design. Mercedes latest COMAND infotainment system also features, as does a high-end Burmester stereo if you choose the Premium Plus pack.

Three engines will initially be offered with the E-Class Coupe. The only diesel is the 191bhp E220d and this is the fuel-economy star, officially returning 70mpg. It also produces less CO2 – 106g/km to be precise – than any other model. This means company car users can expect a Benefit-in-Kind rate of 21% if they choose the diesel Coupe.

If you're after a petrol engined E-Class Coupe, the 2.0-litre E300 produces 242bhp and returns 44mpg, while the top-of-the-range 3.0-litre E400 produces 328bhp and manages 35mpg. This last engine is the only six-cylinder in the initial line-up, and also comes with Mercedes’ 4MATIC four-wheel-drive system. 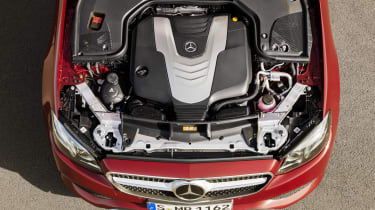 Whichever engine you go for, performance in the new E-Class Coupe will either be brisk, fast or seriously swift. The slowest engine – the diesel E220d – takes 7.4 seconds to go from 0-62mph, while E300 is a second quicker and the E400 4MATIC takes just 5.3 seconds to do the same. All cars come with a nine-speed automatic gearbox as standard.

Because first deliveries of the new Mercedes E-Class Coupe aren’t expected until spring 2017, next April’s new set of road tax rules will apply. Under these, all E-Class Coupes will be £450 a year for the first five years of ownership, as the starting price is over £40,000. 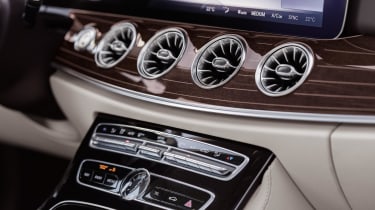 The E-Class Coupe is being initially offered in AMG Line trim only. This includes 19-inch alloy wheels, all-round LED lights, an assertive bodykit, ambient lighting, part synthetic leather part, suede-effect seats, a DAB radio and sat nav. The interior and exterior are also adorned with flashes of chrome and stainless steel, while the E400 comes with air suspension as standard. 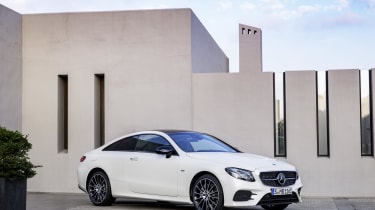 The Coupe’s suspension is 15mm lower than the E-Class saloon’s, which should minimise body lean and encourage spirited driving. All cars come with a ‘Dynamic Select’ feature, too, which allows you to choose from ECO, Comfort, Sport, Sport+ and Individual modes as the mood takes.

Although AMG Line is the only trim, there are a couple of equipment packs to choose from. The Premium package costs just under £2,800 and adds keyless entry and go, as well as a powered bootlid. It also brings a panoramic sunroof and a memory function for the seats, mirrors and steering wheel.

Shell out a shade under £4,000 for the Premium Plus pack and you get upgraded ‘Multibeam’ headlights (see below) and a Burmester surround sound stereo, in addition to the kit listed above. The Night Package, meanwhile, brings gloss black wheels and exterior trim details, as well as tinted rear windows, for around £600.

Many buyers will be drawn to the optional 20-inch alloy wheels, which are £595, and don’t forget to factor in metallic paint, which is £645. Genuine leather seats are either £1,095 or £1,595 depending on quality, while wooden dashboard trim inserts are £645.

Other options include heated armrests, soft-closing doors, a head-up display, a 360-degree camera system and an integrated air freshener.

The new E-Class Coupe wouldn’t be a modern, high-end Mercedes if there weren’t some serious technology on offer. If you choose Mercedes’ latest COMAND Online package (it’s just under £1,500, though standard on the E400) full smartphone integration – including Apple CarPlay and Android Auto – features, as does wireless phone charging. The E-Class Coupe’s aerial can also act as a signal booster for mobile networks, while Near Field Communication (NFC) means the car can be locked and unlocked with a mobile phone, should you wish. With COMAND Online fitted, the additional 12.3-inch dashboard screen becomes available, though you’ll need a further £500 or so if you want this. 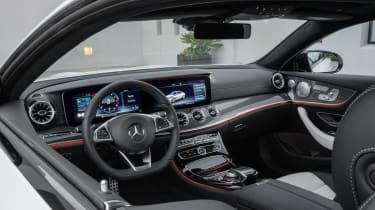 Lights are all the rage right now in car design and the E-Class Coupe has a couple of party tricks up its sleeve when it comes to illumination. Its optional LED ‘Multibeam’ headlights – first seen on the Mercedes CLS four-door coupe – comprise 84 individual LED beams that automatically adjust their distribution on the road, giving you optimum brightness without dazzling oncoming traffic

These are complemented by LED rear lights, which illuminate progressively from the centre of the car outwards when it's opened, reversing this salutation sequence when it's locked. 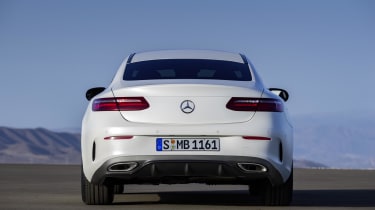 Another neat feature: Mercedes’ ‘Magic’ windscreen wipers come as standard. These squirt washer fluid directly along the length of the wiper blade body, rather than screenwash being jetted out separately. The system is said to significantly reduce the reduction in visibility that can follow cleaning the windscreen on the move.

Mercedes has a genuinely impressive reputation for safety, so it’s no surprise to learn the new E-Class Coupe comes as standard with autonomous emergency braking (AEB). This relatively recent protective system brakes the car for you automatically if it senses an obstacle you’ve not taken appropriate action to avoid. Research suggests it can reduce rear-end collisions by as much as 38%. 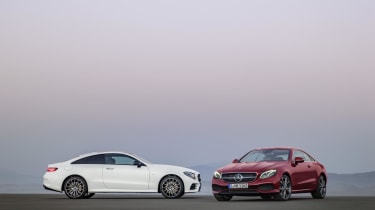 Specify the Drive Pilot system and the E-Class Coupe will automatically follow the car in front at speeds up to 130mph, while the ‘Remote Parking Pilot’ allows you to use a smartphone app to pull in and out of parking spaces and garages.