We now have images and full details of the new Porsche Panamera Sport Turismo, which has been launched at the Geneva Motor Show.

The Sport Turismo version of the Panamera adds practicality to Porsche’s large hatchback, with an estate-style boot end and more passenger space for those sitting in the back. The car’s most obvious rival will be the Mercedes CLS Shooting Brake.

The Sport Turismo’s silhouette retains the coupe-influenced styling of the standard Panamera, but its new rear end looks slightly elongated, despite the fact the new model is the same length as the standard one. The boot has an active spoiler that pops up at high speed to create more downforce, but is tucked away the majority of the time to reduce drag and increase economy.

Extra practicality is essentially the purpose of the Sport Turismo. Boot space has increased by 25 litres to 520 (1,390 litres with the rear seats folded down), while more headroom and larger rear doors should make journeys in the back even easier and more comfortable for rear-seat passengers. 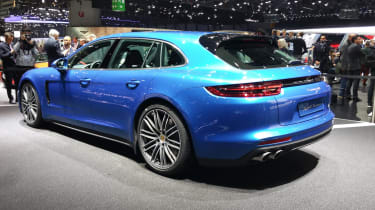 It’s possible to have three people seated in the back of the Sport Turismo model, which is a change from the 2+2 layout of the standard Panamera. You can choose between both, so those who want the two power-adjustable seats separated by a centre console can do so if buying a Sport Turismo.

The range starts with the base model, called the 4 Sport Turismo, and even this comes with four-wheel drive. It uses a 3.0-litre six-cylinder engine developing 327bhp and costs £73,071. A 456bhp E-Hybrid model, claiming economy of 113mpg and CO2 emissions of 56g/km, is priced at £83,288. Buyers should be aware that the hybrid powertrain does eat into the car’s boot space, dropping it to 425 litres. 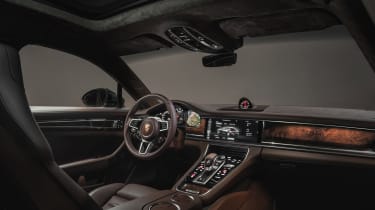 The new Porsche Panamera Sport Turismo is available to order now – you can read our full review here.