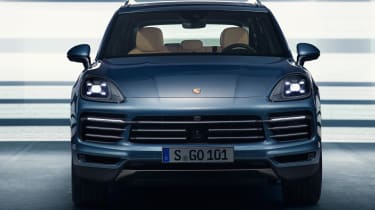 This is the new Porsche Cayenne, a range-topping SUV its maker describes as three cars in one: a sports car, an SUV and a car suitable for touring over vast distances.

When it arrives in showrooms next year, the new Cayenne will offer BMW X5, Range Rover and Audi Q7 customers a sporty take on the large SUV format. The Cayenne Turbo, meanwhile, brings near-supercar performance to the large SUV sector thanks to its 542bhp twin-turbo 4.0-litre V8 engine.

And while the new Cayenne pays strong homage to its predecessor from the outside, inside and under the metal it’s a thoroughly fresh and reworked machine. Key aspects of the new model are increased space, decreased weight and state-of-the-art technology, much of which is aimed at maximising safety, driver involvement and off-road prowess. 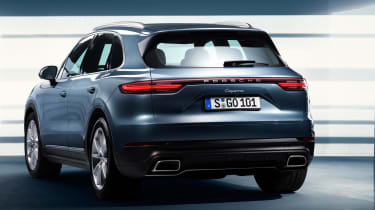 A diesel and hybrid model are understood to be in the pipeline, but Porsche will initially offer the Cayenne in two petrol flavours: a standard 335bhp model and the 434bhp Cayenne S, featuring a reworked version of the twin-turbo 2.9-litre V6 fitted to the hot Audi RS5.

The Cayenne takes just 6.2 seconds to go from 0-62mph and reaches 152mph, while the Cayenne S has a top speed of 164mph and does the 0-62mph sprint in just 4.9 seconds if you specify the optional Sports Chrono Package.

Four-wheel drive is standard and all Cayennes come with an eight-speed Tiptronic automatic gearbox.

Drawing inspiration from the Porsche Panamera means few will sit in the Cayenne without being impressed. A 12.3-inch HD touchscreen, supplemented by voice control, sits at the top of the dashboard, while the large, glossy central console features a stubby gearlever and a series of knurled metal rocker switches for temperature controls. 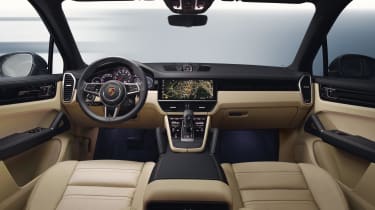 Further illuminated buttons provide haptic and audible feedback when operated, making for easier use on the move. Unlike the Panamera, however, the Cayenne features grab handles either side of the central console, which give driver and front-seat passenger a further point of support should they venture off-road.

And while the driver is faced with a pair of digital dashboard dials behind the steering wheel, in true Porsche fashion these flank a central – and analogue – rev counter.

The 2018 Porsche Cayenne is available with an almost bewildering array of technology – although much of it is optional.

A set if 19-inch alloy wheels, all round parking sensors, a wi-fi hotspot and LED headlights are standard, but go for the Dynamic Light System Plus and you’ll gets matrix LED lights, which light the road up around oncoming vehicles, providing full-beam-like illumination without dazzling other road users.

Optional features include new hi-tech ‘Porsche Surface Coated Brakes’, which comprise cast-iron brake discs with super-tough tungsten-carbide coatings. These improve braking performance, reduce brake dust and have eye-catching white brake callipers – although you need to order 21-inch alloys if you want them, and they sit below the (likely more expensive) carbon-ceramic brakes in the Cayenne’s range of options. 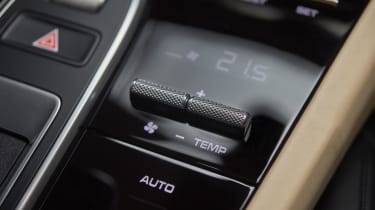 Another option – albeit one the vast majority of Cayenne customers are expected to choose – is the Sports Chrono Package. This bundle brings a mode selector on the steering wheel, which has Normal, Sport, Sport Plus and Individual driving modes, enabling you to make the most of the Cayenne’s driving dynamics. The Sport Chrono Pack also brings about an increase in performance, reducing the standard Cayenne’s 0-62mph time from 6.2 to 5.9 seconds, while the Cayenne S takes 4.9 instead of 5.2 seconds to do the same.

Those who seek maximum cornering ability will be interested in the rear-axle steering. Carried over from the Panamera and Porsche 911, this is expected to lend the new Cayenne tenacious grip, agility and stability. At the other end of the spectrum, the Cayenne comes with a series of off-road modes including mud, sand, gravel and rocks. 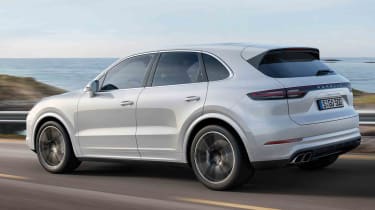 The 2018 Porsche Cayenne Turbo features a 4.0-litre twin-turbo V8 engine, which produces 542bhp and gets the big SUV from 0-62mph in just 4.1 seconds. Opt for the Sports Chrono pack and that time will shrink to 3.9 seconds thanks to the addition of launch control, while top speed is rated at 177mph with or without the Sports Chrono option.

Other highlights include an active rear wing, which rises to act as an air-break under heavy braking, 21-inch alloy wheels, quad exhausts, a butch bodykit and the tungsten-carbide brakes described above, which are fitted as standard to the Turbo. Adjustable air suspension is also included, and all Cayenne Turbos come with an eight-speed Tiptronic automatic gearbox. 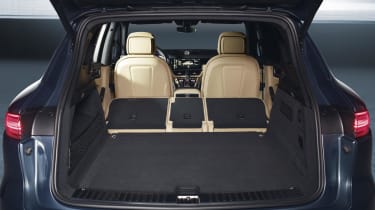 Porsche has managed to shave 60kg off the new Cayenne’s weight compared to its predecessor, although this hasn’t come at the expense of practicality. While the new car is 63mm longer and 9mm lower than the one it replaces – and still still a five-seater – the 770-litre boot is 100 litres larger than before, matching the commodious Audi Q7 for space. Individually folding rear seats and a series of storage nets seal the cargo deal.