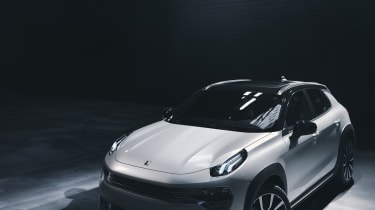 These are the first official images of the Lynk & Co 02, which looks set to reach showrooms before the end of 2020.

Fitting in between the Lynk & Co 01 SUV and the 03 saloon that's expected to follow, the 02 is aligned with what is probably the most competitive sector of the new car market, with designs on would-be Renault Captur, Nissan Juke, SEAT Arona and Volkswagen T-Roc customers. Distinctive looks and the promise of a premium finish mean it could well attract buyers away from the Audi Q2 and BMW X1, too.

Described as “sporty, adventurous, dynamic, daring, confident and fun”, the 02 crossover is lower and shorter than its 01 SUV sister and has a more car-like appearance. Big wheels and a low sill height give the impression of a car that's hunkered down on the road, yet there’s still has a streak of SUV in its design, which is further emphasised by two-tone colour schemes and prominent grey wheel arch surrounds.

Lynk & Co's distinctive nose treatment is more expressive on the 02; its 'mouth' incorporates a slimmer grille that widens around the car's headlamps, while its 'eyes' house LED strips for the daytime running lights and indicators. Like every Lynk & Co design shown so far, these are mounted where the bonnet surface begins – not unlike the Nissan Juke. The car's sporty proportions recall the Porsche Macan, while some of the surface details and contours wouldn't look out of place on an SUV from DS Automobiles.

Lynk & Co sees the 02 as its core product, and aims to attract a "target audience of globally connected urbanites".

'Connected' is a key word here; like other models in its range, L & C intend most 02s to be 'sold' on a subscription basis, more like a mobile phone than a car. Similarly, it'll be shown off in 'stores', rather than dealerships, and London will be among the first cities to have one. 'Pop-up stores' are set to visit other European cities on a weekly basis, while potential buyers can always visit Lynkco, the brand's 'online store' and the 'hub' of the business.

Lynk & Co senior vice president Alain Visser outlined the comapny’s subscription-based ownership model to Auto Express, our sister publication: “For a price per month you become part of the Lynk & Co community. You buy a Lynk & Co contract, like a mobile phone, maybe for one month, maybe for one week, maybe for 1,000 miles or you just continue to do it.” 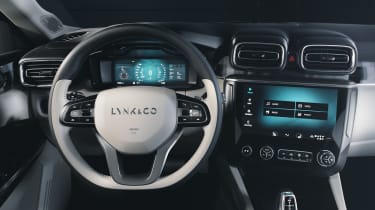 Where the scheme really sets itself apart is its in-built car sharing option. Visser explains: “So say you pay your monthly fee; we haven’t calculated it but let’s assume it’s £200; and you spend five days a month where the car is at the airport. For these five days you put your car on share, and for £20 a day you get £100 back. It’s a very simple business model for an individual to understand.”

If you're worried about putting your pride and joy in the hands of a stranger, Lynk & Co's chief digital officer, David Green, offers reassurance: “You get to choose who uses your car – friends and family, a wider community, or anyone – and it runs on feedback to see who you can trust. And how you take payment depends on the market.”

That sharing will take place via a smartphone app, which will allow a digital keycode to be shared between users. The company will also provide subscribers a with a lifetime warranty, as well as providing over-the-air updates, which will essentially mean trim upgrades are available for customers whenever they want. 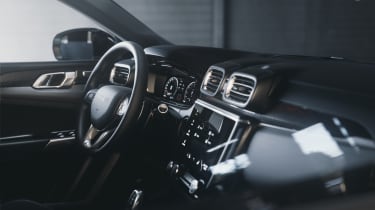 Geely – Lynk & Co's Chinese parent company – also owns Volvo, and this means the 02 gets to share the Swedish company's technology – not least its plug-in hybrid powertrains. The 02 is understood to employ a version of the Compact Modular Architecture (CMA) platform that underpins the latest Volvo XC40 SUV, as well as the next generation Volvo V40. It's a safe bet that the 1.5-litre, three-cylinder plug-in hybrid system that's earmarked for the XC40 will be the key engine choice for the Lynk & Co 02.

All Lynk & Co cars, including the 02, will be built in Volvo's production facility in Ghent, Belgium, hinting a model range that's strongly tailored towards European tastes. Speaking at Volvo's headquarters in Gothenburg, Sweden, Alain Visser said "As a global brand with a strong European identity, these announcements in our home nations fill me with pride". 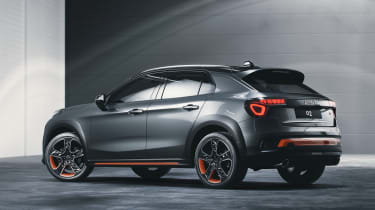 Lynk & Co promises that its lineup steps away from the traditional trim level hierarchy, with 'collections' of single-price models instead of a lengthy options list. Pricing and full specification will be announced closer to the 02's on-sale date, but expect a comprehensive connectivity suite on all models. 'Connected' living is at the centre of the brand's identity, and wireless charging, an online 'cloud' and the 'world's first in-car share button' will all be part of the 02's 'smartphone on wheels' package.

The 02 is expected to arrive in the UK towards the end of 2020, trailing 2019's larger Lynk & Co 01 SUV sister, which has already been launched in Geely's native China.

A third model, the 03 saloon, is expected at a later date.