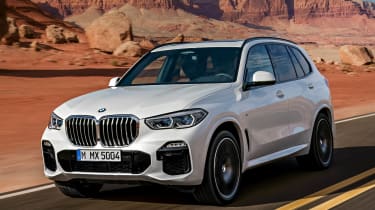 The all-new BMW X5 SUV has arrived, upping its game to take on modern rivals like the Volvo XC90 and Audi Q7. It’s bigger and more stylish than before, features a range of more efficient engines and the latest technology, with a full complement of up-to-date infotainment, driver assistance and safety features.

The X5’s longer, wider and taller body features a more modern take on BMW’s family look, with a huge grille and redesigned front and rear lights being the most obvious changes. Crucially, the X5’s increased size helps maximise practicality: a 640-litre boot expands to 1,860 litres with the rear seats folded down. BMW describes passenger and luggage space as ‘generous’.

Inside, the X5 gets an interior that follows a similarly evolution to the exterior, with a more modern design that doesn’t abandon BMW’s good ergonomics. There’s a 12.3-inch screen behind the steering wheel in place of traditional dials, while a second screen of the same size is mounted in the usual central position. The latest version of BMW’s iDrive infotainment system works across these two screens. 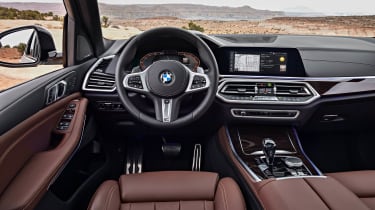 The BMW X5 is available with a choice of one petrol and two diesel engines. The most powerful is the 3.0-litre six-cylinder diesel found in the sporty M50d, with 395bhp and a 0-62mph time of 5.2 seconds. The xDrive30d gets a less powerful version of a similar 3.0-litre engine with 261bhp and a 0-62mph time of 6.5 seconds; this entry-level model is expected to be the biggest seller. The sole petrol option is the xDrive40i, with its 335bhp 3.0-litre six-cylinder engine, boasting a 5.5-second 0-62mph time.

All engines are relatively efficient given their size and the weight of the X5 itself; official economy figures range from 33.2mpg for the xDrive40i petrol to 47.1mpg for the xDrive30d. CO2 emissions range from 158 to 193g/km depending on the model, with the petrol emitting the most. 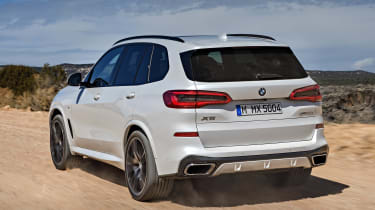 All models get BMW’s xDrive four-wheel-drive system, which puts most of the power to the rear wheels under normal conditions to offer a sportier driving experience, while all-round air suspension is standard on the two xLine models.

Buyers can choose an optional off-road package that adds improved underbody protection and a rear locking differential. The system can be used to optimise the X5 for off-road driving conditions, adjusting ride height, stability control and the car’s engine and gearbox to suit the conditions at hand.

Safety and assistance systems are plentiful. The ‘Parking Assistant’ system is standard on all models and can scan for and park the X5 in parallel spaces, along with a ‘Reversing Assistant’ that controls steering “along a path recently negotiated forwards” – in other words, the X5 can help the driver reverse out of a space that the car was driven forwards into previously, taking over steering while the driver uses the throttle and brakes. The system also includes a 360-degree camera.

The current BMW X5 has trailed its more up-to-date, hi-tech large premium SUV rivals like the Volvo XC90 and Audi Q7 in recent years, so it's no surprise that the new version addresses the shortcomings of its predecessor to help ensure its competitiveness.

BMW SUV buyers looking for the ultimate in interior space and seating options may be better waiting for the forthcoming BMW X7, however. It’s expected to break cover before the end of 2018.