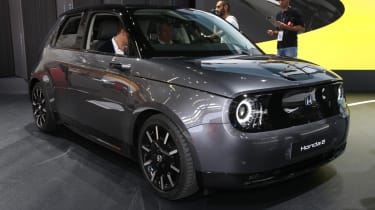 Prices for the new Honda e have been revealed. When it goes on sale in the first half of 2020, the retro-styled Honda EV will start from £26,160 after the Government’s grant for electric cars. The company has confirmed that you’ll be able to buy it on a PCP finance deal for £299 per month after a £6,000 deposit.

Honda has also revealed a range-topping version, called the Honda e Advance, which can be ordered now. It’ll cost £28,660 after the government grant, and will get a 152bhp motor instead of the standard 134bhp motor found in the entry-level car.

The Honda e has been shown at the Frankfurt Motor Show. Honda has also confirmed that its entire line-up will be either electric or hybrid by 2025. 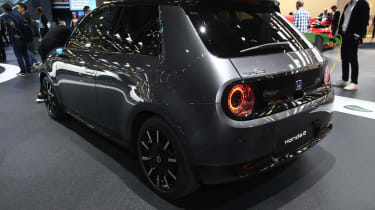 Powering the Honda e is a water-cooled 35.5kWh lithium-ion battery pack and a high-power electric motor, available with either 134bhp or 152bhp. Whichever you go for, it manages 125 miles of range on a full charge and will accelerate from 0-62mph in around eight seconds. Its top speed is likely to be around 85mph.

The Honda e’s battery has been placed in the centre of the car for a 50:50 weight distribution, which bodes well for handling. Fast-charging is also available, which means the battery can be replenished to 80% capacity in half an hour.

The Honda e was first shown at the 2019 Geneva Motor Show and will rival the likes of the Renault ZOE and BMW i3. The firm recently revealed that five colour options will be available: black, grey, blue, white and yellow.

Built on an all-new dedicated EV platform, the Honda e is more compact than its rivals. It also incorporates a more practical five-door design, giving it increased interior space that can comfortably accommodate four adults.

Among changes to the exterior from the earlier Urban EV prototype first seen in 2017 are flush ‘pop out’ door handles, cameras instead of traditional wing mirrors, a charging port located on the bonnet that can be used from either side of the car, and an LED charging indicator in the windscreen. 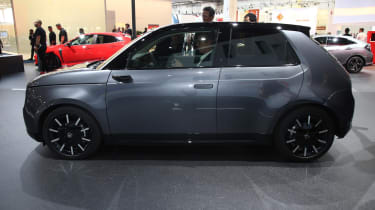 The interior of the Honda e closely follows the one shown in the e Prototype model seen earlier this year at the Geneva Motor Show, featuring a dual screen horizontal display stretching from door to door, which incorporates a range of connected applications. These contain the battery and charging information, with all the essential menus laid out next to the driver. From here, you can also switch to the navigation, voice control and phone functions.

In front of the driver there’s a digital driver’s display in place of traditional dials; it shows an array of information, including the battery charge, audio and speed. There are two screens next to the doors that are displays for the side-mounted cameras, which replace the wing mirrors. 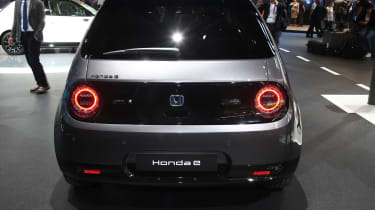 Despite the car’s retro looks, it’s clear there’s no shortage of technology and equipment on board. On top of all the screens, the production version of the Honda e will include a host of luxuries including cruise control, a heated steering wheel, heated front seats and keyless start. There’s also a Honda Virtual Assistant, allowing you to ask the car a range of questions, and a My Honda+ smartphone app, which gives you a selection of features like showing you where you parked the car. It also lets you remotely lock and unlock the car.

We've driven a Honda e prototype, to read out thoughts go here. Or why not see how the e compares to its rivals with our picks of the best electric cars of 2019.