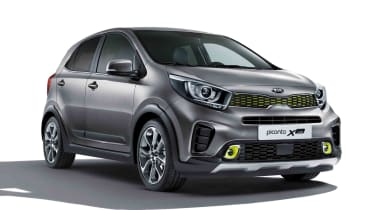 While not quite a full crossover, the Picanto X-Line draws inspiration from the ever-popular SUV market, bringing a raised ride height, silver skid plates, beefier bumpers, black plastic cladding on the wheelarches and green foglight surrounds for a more imposing, rugged look.

Offered with Kia’s 99bhp 1.0-litre turbocharged petrol engine, the Picanto X-Line goes on sale in Europe in the last quarter of 2017 and will be shown in the metal to the public at September’s Frankfurt Motor Show.

Being fundamentally a Picanto underneath, the X-Line retains that car’s interior layout, albeit with lime-green stripes on the door handles. While these may not be to everyone’s taste, it’s understood should you specify the foglight surrounds in silver rather than green, the interior accents will also change.

Kia recently unveiled the larger Stonic SUV crossover, which sits on the same platform as the Rio supermini, while Ford is set to offer its latest Fiesta in crossover Active guise. 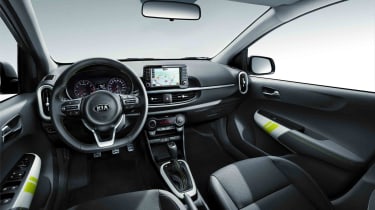 Being a city-car-based, SUV-inspired model makes the Picanto something of a unique proposition. The Vauxhall Adam Rocks is arguably from the class above and likely to be expensive in comparison, for example, while the Suzuki Ignis is also larger, although the Picanto X-Line may come close to matching it on price. The Dacia Sandero Stepway, meanwhile is larger but less sophisticated than the Picanto.

In terms of size, the Fiat Panda 4x4 is probably the closest thing we have to the Picanto X-Line, although this, as the name suggests, comes with four-wheel drive; the Picanto X-Line is front-wheel-drive only.

The Picanto X-Line is scheduled to arrive in the UK in the last quarter of 2017 – any time between now and Christmas, in other words. Pricing has yet to be confirmed, but while the Picanto line-up starts at £9,500, the X-Line model is likely to sit near the upper echelons of the range, which currently tops out at around £14,000.