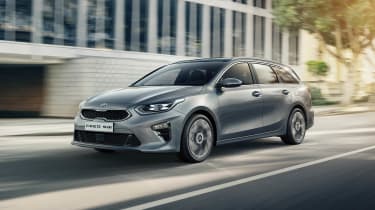 Kia has unveiled an all-new Ceed Sportswagon as the second of four new models in the range. It's set to rival the Vauxhall Astra Sports Tourer and Volkswagen Golf Estate when it hits showrooms in the autumn.

The latest Ceed Sportswagon is a very important car for Kia – the previous model made up around 40% of Ceed sales and was a serious competitor to the Ford Focus Estate. The South Korean brand will hope it can take sales from the SEAT Leon ST, Peugeot 308 SW and Renault Megane Sport Tourer, too.

The Ceed name, incidentally, signifies Community of Europe with European Design. The apostrophe previously found in the name has been deleted in a bid for greater clarity, although it's rumoured that internet search considerations prompted the change.

Like its predecessor, the Ceed Sportswagon was designed at Kia's European headquarters with the continent's tastes in mind. It's more stylish than the previous model, too, with clear influence from the Kia Stinger, particularly around its 'tiger nose' grille, while 'ice cube' daytime running lights are now built into the headlights on every model – not just the GT Line. The rear-end treatment, meanwhile, recalls a scaled-down Kia Optima Sportswagon.

The new looks disguise a slight increase in overall size. The Sportswagon has gained height, length and width, and although the distance between the front and rear axles is unchanged, there's a longer overhang behind the rear wheels. This is key to the latest car's much bigger boot, which grows to 600 litres – a 72-litre increase. A lower boot lip is claimed and the rear seats fold completely flat to make loading bulky items easier. 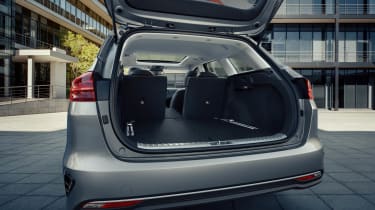 Not only is there more space for cargo, passengers benefit from the increased size, too. Lateral space is increased for greater shoulder room and the rear bench is mounted 15mm lower to increase leg and kneeroom – as well as providing more generous headroom despite a curvaceous roofline.

Interior ambience is said to be improved, too, thanks to “higher-quality materials used throughout”, which include metallic or satin chrome trim. Upholstery choices are cloth and synthetic or natural leather. The horizontally emphasised dashboard design is carried over from the Ceed hatchback and is claimed to free up extra space in the driver and passenger footwells.

The dashboard layout is clear and simple, with a high-mounted touchscreen infotainment display that allows access to Kia Connected Services, which will be offered on range-topping models. TomTom sat nav will also be offered, as well as Apple CarPlay and Android Auto, keyless entry, automatic LED headlights and a heated windscreen. Buyers will also be able to choose an upgraded hi-fi system.

A bristling array of safety technology will be available, including auto-dipping headlights, a driver attention warning system, lane-keeping assistance and forward collision warning with haptic feedback as well as audible warning. There's also 'level two' autonomy in the guise of lane-following assistance – it can take over steering, braking and acceleration to keep you in a selected road lane at 0-80mph. 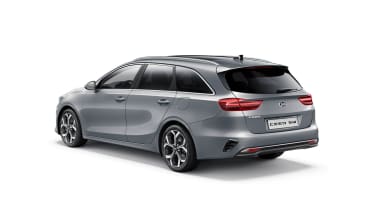 As well as having the ability to drive itself, Kia promises the latest Sportswagon will handle better than its predecessor, having been fine-tuned specifically for European roads. While the Ceed hatchback's entry-level 1.4-litre petrol engine is unlikely to be offered, the Sportswagon will be available with more sophisticated turbocharged engines, including a 1.0-litre and new 138bhp 1.4-litre T-GDi. Two 1.6-litre CRDi diesel engines will be offered, too, and there'll be a choice of six-speed manual or seven-speed DCT automatic gearboxes.

When the Ceed Sportswagon appears in showrooms, there'll be a choice of 11 paint colours and models that include a luxuriously appointed range-topper and a sporty-looking GT-Line. A set of 17-inch two-tone diamond-cut alloy wheels will be offered on the most expensive models.

UK pricing and precise specifications are expected to be announced shortly before order books open in the autumn, but we don't expect a significant rise from the £16,820 start price of today's Cee'd Sportswagon.