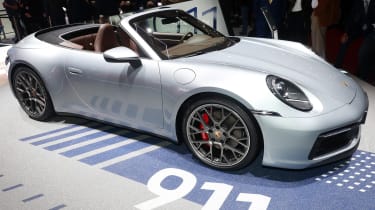 The all-new Porsche 911 Cabriolet has made its European debut at the Geneva Motor Show, after appearing in LA. The new convertible model went on sale in January with a price tag of £102,755 in Carrera S trim – a £9,655 increase over the coupe’s £93,100 starting price.

The latest incarnation of the Porsche 911 was first unveiled at the LA Motor Show in November 2018. Known among enthusiasts by the internal model code ‘992’, the latest version of the car features evolved styling, a new interior, larger dimensions and a retuned engine.

The new 911 Cabriolet has a folding soft top that can be opened and closed automatically at speeds of up to 31mph in around 12 seconds. An electrically extendable wind deflector features, along with a new magnesium framework that prevents ballooning at speed.

The new 911 is longer, wider and taller than before, with an overall design that harks back to the 993-era model of the 1990s. A squared-off bonnet, pop-out door handles and a full-width LED rear light are key features, along with new LED headlights and new surfacing to many of its panels. There’s no longer a difference in width between two- and four-wheel drive variants; both now get the same wide-hipped bodywork. 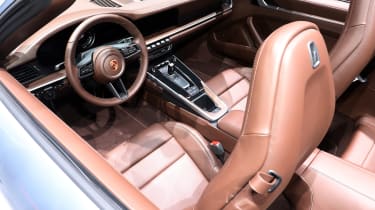 The 911 has been brought into line with the latest Porsche Panamera hatchback and Porsche Cayenne SUV on the inside. Porsche's traditionally driver-focused dials remain and feature a new rev-counter design, while haptic buttons and uprated infotainment with a 10.9-inch screen helps create a hi-tech feel.

Under its new body, the new 911 has seen its platform optimised for future electrification. For now though, there’s only one engine and trim choice: the 911 Carrera S. This is powered by the same three-litre twin-turbocharged flat-six petrol engine as the outgoing model, but gets a power increase to 444bhp – 30bhp more than before.

The new car is only available with Porsche’s latest eight-speed PDK dual-clutch gearbox from launch, though a seven-speed manual is expected to arrive in due course. For now, Carrera S and Carrera 4S models are the only choices; each use the same 3.0-litre engine, with the latter featuring four-wheel drive.

An increase in overall width compared to the outgoing 991 model allows the 992 a wider track (the distance between the left and right wheels), which should provide even greater stability than in previous models. 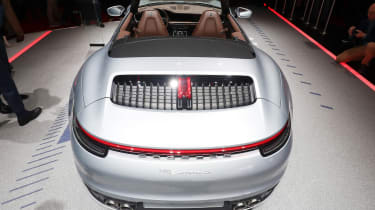 Performance lives up to the 911 badge; the Carrera S will manage 0-62mph in 3.7 seconds, with the four-wheel drive model doing so in just 3.6 seconds. The ever-popular optional Sports Chrono pack adds adaptive suspension and uprated active roll-bar, along with a sports exhaust and launch control – all of which help improve those times to 3.5 and 3.4 seconds respectively. Official economy and emissions figures are yet to be announced, but these are expected to be better than those of the outgoing car.

Though the Carrera S is the only model currently confirmed for the UK, a slightly cheaper Carrera variant with around 420bhp is set to arrive in March 2019. We also expect higher-powered Carrera GTS and Turbo models in due course, with the highly anticipated track-focused GT3 also likely to arrive in the next couple years or so. As is the case today, 911 Cabriolet models will carry a small price premium compared to their coupe equivalents.

Want to see all the 2019 Geneva Motor Show star cars? Find them all in our round-up