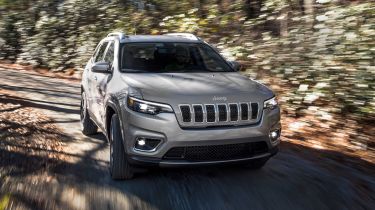 There will be nine new or redeveloped Jeep models launched by 2022, according to a new product plan announced by British boss Mike Manley. It will include a small crossover SUV that will be smaller than the Jeep Renegade and rival models like the SEAT Arona and Renault Captur.

The smallest model in Jeep’s lineup will be available with a plug-in hybrid powertrain and the manufacturer’s latest connected and autonomous driving features. A redeveloped Jeep Compass and an all-new Jeep Renegade will also arrive within the next five years.

Jeep’s new strategy also confirmed that diesel engines will be gradually phased out of Jeep’s European models as new petrol, mild-hybrid, plug-in hybrid and battery electric models replace them by 2022. Every model range will feature a plug-in hybrid, and Jeep’s small, medium and family-sized models will also be offered with a fully electric option. 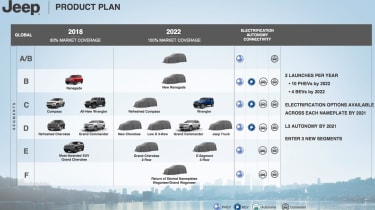 New models will include a Cherokee that’s likely to be offered with the option of seven seats for the first time in its history, making it a closer rival to the Skoda Kodiaq and Land Rover Discovery Sport. A new Grand Cherokee will also be introduced with a seven-seat option for families.

Jeep also announced it will bring back the Wagoneer and Grand Wagoneer badges for two range-topping SUVs, both of which will feature plug-in hybrid technology.

The Chinese market continues to be a major focus for Jeep, so much so that the brand is planning two China-specific models, along with plug-in hybrid and battery electric versions of four models sold in the region. Production is also set to increase to meet anticipated demand.

With successful Trailhawk and Trackhawk versions aimed at off-road and track use already under its belt, Jeep is also planning a Cherokee Deserthawk for 2020 that will meet a “rigorous set of engineering standards” and could account for 10% of all Cherokee’s sold globally.