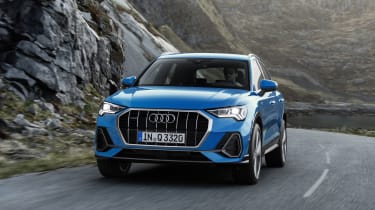 Audi has announced a top-spec Edition One model to head its all-new Audi Q3 range, which is set for launch in November. The new model is slightly larger than the outgoing car and Audi that improvements have made in technology and comfort.

The premium SUV ranks have swelled since the previous Audi Q3 was launched. As well as the BMW X1, Mercedes GLA and Range Rover Evoque, the Q3 faces competition from the BMW X2 and Jaguar E-Pace.

The all-new model is thoroughly updated inside and out, with bold new styling that brings the Q3 in line with the brand’s latest family look, sharing the bulky, muscular lines of its smaller Audi Q2 sibling.

The 2019 Audi Q3 adheres to the German brand's proven and much-liked corporate identity outside, but it could be argued that the changes inside are rather more noticeable. In place of the low-slung dashboard with its pop-out MMI infotainment display, you'll find a bluff full-width edifice with a striking hexagonal section that was first seen in the range-topping Audi A8 saloon. High-quality materials are used for trim throughout, while optional ambient lighting with 30 selectable colours helps to inject some fun. 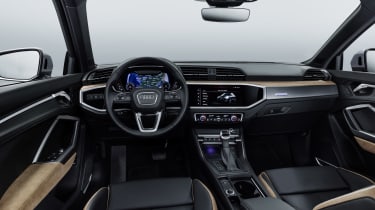 The Q3's infotainment display is more modest than that of the A8, but still becomes virtually invisible when switched off, blending in with its glossy black surroundings. Entry-level models have an 8.8-inch screen, with a 10.1-inch version part of the MMI Navigation Plus option. Audi's Virtual Cockpit system is standard, too, with a 10.25-inch colour screen in place of conventional instrumentation. You can upgrade this to a 12.3-inch version when the MMI Navigation Plus option is ticked on the order form.

Thanks to the Audi Q3’s larger dimensions, interior and boot space gets a boost: with the rear seats slid forward, the boot measures in at 675 litres, or 1,525 litres with the 40:20:40 split rear seats folded flat.

The new Audi Q3 will be offered with a choice of three petrol engines and just one diesel. There’s a 1.5-litre petrol with 148bhp that’s badged under Audi’s latest nomenclature as the 35 TFSI, offered initially with a seven-speed automatic gearbox and front-wheel drive. It's claimed to manage 0-62mph in 9.2 seconds.

A 2.0-litre petrol engine will be available with 187 or 227bhp in 40 TFSI and 45 TFSI forms respectively. Both will be offered with a seven-speed automatic and quattro four-wheel drive as standard. The 0-62mph acceleration times are 7.4 and 6.3 seconds respectively.

The diesel engine is also a 2.0-litre, producing 148bhp; this will be offered with a manual gearbox and quattro initially, followed by an automatic front-wheel-drive version later. Audi will offer its Drive Select system as an option, with drivers able to choose from six driving modes to best prepare the car for the conditions at hand, including off-road driving.

The 2019 Q3 is set to follow Audi's usual pattern of basic, Sport and S line trim levels, with a sporty Audi SQ3 expected to follow. There's no word yet on a high-performance Audi RS Q3 version.

Audi has confirmed that all models will feature the brand's virtual cockpit system in its 10.25-inch form as standard, as well as MMI radio with Bluetooth smartphone connection. Audi's pre-sense safety systems, including autonomous emergency braking, lane-departure warning and lane-departure assistance, are standard equipment, as are light-sensing headlamps and rain-sensing wipers.

The top model at launch will be the Edition One. It builds on the S line's standard bodykit and sporty interior styling and adds 20-inch alloy wheels plus matrix LED headlights. It's distinguished by a black finish to the four-rings emblem and rear model designations. Inside, there's colour-contrasting stitching to the sports seats, a flat-bottomed leather steering wheel and Alcantara suede trim to dashboard sections and door armrests. The ambient lighting package is also included as standard.

The Audi Q3 will be launched in mainland Europe in November this year, with sales beginning soon after. A modest price rise is likely compared to today's Q3, which starts at £27,915. UK deliveries are expected to begin early next year.