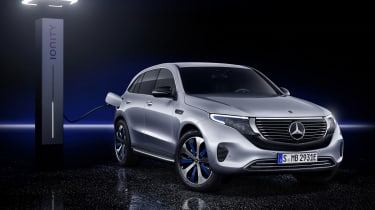 Prices have been revealed for the new Mercedes EQC, an electric SUV that’s set to take on the Tesla Model X, Jaguar I-Pace and Audi e-tron. The EQC will start from £65,640, while a limited-edition model will cost nearer £80,000. You’ll be able to buy Mercedes’ electric SUV from July.

The new car is the first to carry Mercedes’ new ‘EQ’ name, a badge that’s set to be found on all forthcoming Mercedes EVs and hybrids. At recent motor shows, the German manufacturer has revealed EQA and EQV concepts based on the Mercedes A-Class and Mercedes V-Class respectively and, along with the EQC, they will be the first of a large range of electric Mercedes models.

You’ll be able to choose from four main trim levels and there will be two limited-edition models too. Kicking off the line-up is the Sport model, costing £65,640. As standard, it features active parking assistance, LED headlights, heated front seats, Mercedes’ latest MBUX infotainment setup and a reversing camera. 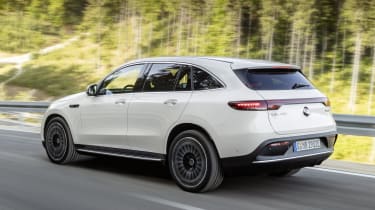 Upgrading to AMG Line adds a sportier bodykit with a redesigned grille and black accents, larger alloy wheels and leather sports seats, and costs from £67,635. Above that is the AMG Line Premium model at £72,280, which adds a sliding panoramic sunroof, wireless phone charging compatibility, a premium sound system and the ‘Energising’ package, which automatically adjusts the climate control and lighting to improve the driver’s well-being on long trips.

Top-of-the-line AMG Line Premium Plus adds memory seats, voice and gesture control, a 360-degree camera and a head-up display, and costs £74,530. There’ll also be two special-edition models available from launch. The First Edition is available for the first year that the EQC is on sale and is based on the Sport trim level. It comes with a Burmester sound system, an electric sunroof and augmented-reality navigation, which overlays directions onto a camera feed of the road ahead.

The second special edition is the ‘Edition 1886’. Also based on the entry-level trim, it adds larger alloy wheels, memory seats, a 360-degree camera and a head-up display. Only 100 will be made and each one will cost £79,260, almost £5,000 more than the First Edition model.

The Mercedes EQC is powered by two electric motors – one for each axle. These produce a total of 300kW (equivalent to around 402bhp equivalent) and 765Nm of torque – enough to propel the near-2.5-tonne car to 62mph from rest in just 5.1 seconds, and on to a top speed of 112mph.

Five driving modes will help make the most of the Mercedes EQC’s EV powertrain: COMFORT, ECO, MAX RANGE and SPORT. Drivers will also be able to select the level of energy recuperation using paddles behind the steering wheel – in the most aggressive setting, Mercedes claims that one-pedal driving is possible thanks to a heightened engine-braking-like effect.

Mercedes claims that the car’s battery – a lithium-ion pack with an 80kWh capacity – can be charged from 10 to 80% in around 40 minutes at a 110kW charging station. An optional wallbox will be offered for faster home charging.

The new car boasts a unique design that aims to set it apart from Mercedes’ non-EV products. The front end is dominated by a large grille surrounded by a black front panel that joins the standard adaptive LED headlights with an illuminated optical fibre, while the rear features a large bar-shaped rear light and an integrated roof spoiler. The car gets a sleeker, more athletic look than standard Mercedes SUVs, while blue detailing on the new alloy wheels also help set it apart as something new.

Inside, the EQC gets Mercedes’ latest dual-screen MBUX infotainment system which can be used to track vehicle readouts including range, charge status and energy flow, as well as featuring a sat nav system that’s optimised for EV use, making locating a charging section easy. The MBUX display is mounted on a dashboard with trim intended to resemble the cooling fins on a hi-fi amplifier; the exterior’s blue details continue inside and are joined by rose-gold coloured air vents. Mercedes claims that the EQC's interior is “extremely quiet” thanks to rubber mounts for noisier drivetrain parts and extensive insulation. 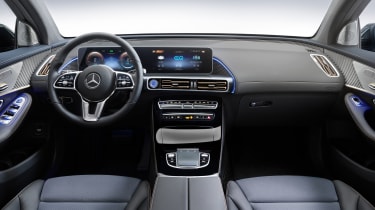 At roughly the same size as the Mercedes GLC SUV, the EQC boasts room for five and a 500-litre boot. Practicality is boosted further by the car’s decent towing capacity of 1,800kg (unbraked).

As can be expected of a next-generation luxury EV, the Mercedes EQC will be available with a host of active driver assistance and safety features. Among these are Active Distance Assist, which automatically adjust the car’s speed when approaching traffic queues, and a lane guidance system that keeps the car off-centre when in heavy traffic to leave space for emergency vehicles. Mercedes also claims that the EQC’s passive safety protection exceeds legal requirements, thanks to a complex structure that protects the drivetrain and battery.

What does the Mercedes EQC mean for car buyers?

The Mercedes EQC is the latest in a line of luxurious EVs to arrive in the wake of Tesla’s genre-defining, gull-winged Model X. Prices are about the same as a Jaguar I-Pace, which starts at over £64,000. Meanwhile, Audi has entered the fray at a similar price point with its e-tron, another electric SUV with great potential. Tesla’s Model X is a known quantity and certainly very fast – prices currently start at around £84,000.

We’ll have to wait to drive the EQC to see if the Mercedes can match or beat its rivals, but things look promising on paper when it comes to range: its claimed 279-mile range beats that of the Tesla (259 miles) and Audi (249 miles), and only falls slightly short of the class-leading Jaguar (298 miles). Its real-world performance is likely to feel similar to all but the Tesla, too.