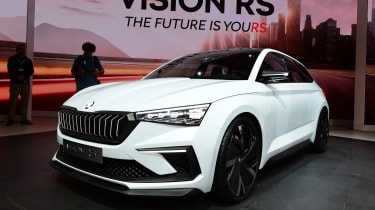 Skoda has unveiled its Vision RS concept at the Paris Motor Show, to provide a flavour of what the next Skoda Rapid hatchback will look like.

Although Skoda says that the Vision RS previews the look of future models with the high-performance RS badge, the concept's hatchback shape is close to that of the Skoda Rapid hatchback, which – having gone on sale in 2012 – is due for imminent replacement.

The RS Concept was revealed alongside the Skoda Kodiaq vRS, which recently established a seven-seat SUV lap record at the famous Nurburgring circuit in Germany. The Kodiaq vRS is the first SUV to wear the RS initials, and signals that Skoda plans to increase the breadth and scope of its high-performance portfolio. 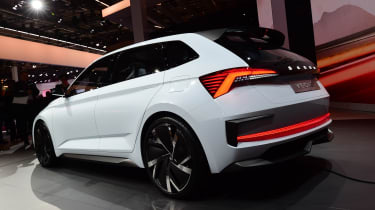 The Vision RS has been revealed as 4,356mm long, 1,810mm wide and 1,431 tall – a virtual match for the Volkswagen Golf, Ford Focus and Vauxhall Astra. Meanwhile, the concept has rear windscreen that stretches to between the rear light clusters; a styling cue shared with the present Skoda Rapid Spaceback. That model also has a similar side-window treatment to the concept.

Of course, being presented as a vRS model, the concept has a far more aggressive and contoured look elsewhere. Hinting towards a future Volkswagen GTI rival, it points towards the next Skoda Rapid being pitched more assertively against mainstream European rivals, appealing on performance, style and desirability as opposed to the equally relevant but less glamorous qualities of value and reliability. 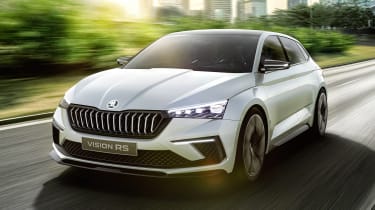 Perhaps more fanciful is the concept car's interior. It features four individual bucket seats, a metallic full-length centre console and an aerofoil-shaped floating dashboard with free-standing infotainment screen. While the ideas presented in the concept will likely be toned down before entering production, certain touches – such as ambient lighting, seat belts and dashboard stitching picked out in red – seem almost certain to appear in a showroom vRS model.

Skoda's car range is steadily expanding: an entry-level compact SUV is on its way and the brand's 2017 Vision E concept demonstrates that Skoda is thinking seriously about an electrified future. Although Skoda has yet to confirm that the Vision RS is a direct preview of the next Skoda Rapid, we expect an all-new model late in 2019.