Skoda is set broaden SUV range, but European sales for the GT are uncertain 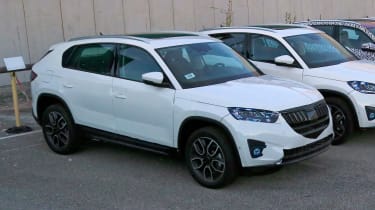 A coupe-style version of the Skoda Kodiaq SUV has been spotted in prototype form, potentially heralding a global move for the Czech brand to compete with upmarket rivals.

It has yet to be confirmed that the Chinese-built Skoda Kodiaq GT will ever be offered in the UK or mainland Europe, but the coupe-styled SUV certainly underlines the brand's ambitions to move upmarket. The sleeker Kodiaq is expected to go on sale soon as a rival to the BMW X4 and Mercedes GLC Coupe in Asia's rapidly growing car market. 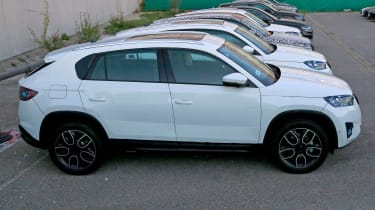 On its launch, the Kodiaq GT will join the low-cost China-only Skoda Kamiq. Alongside the familiar Skoda Karoq and regular Skoda Kodiaq, these models are hoped to increase the brand's global sales to 1.5 million cars a year by 2020. That equates to a 50% increase on the Skoda's 2014 result. But could the trendy Kodiaq GT coupe-SUV be offered in Europe?

Christian Strube, Skoda's board member with responsibility for research and development, knows that there's a strong case for selling the Kodiaq GT in Europe. "We would like to have this car in Europe, yes," he said. "The real problem is that we do not have the capacity to build everything that we would like to build." 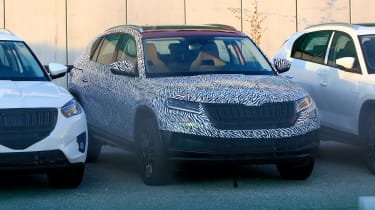 The issue, it seems, is one of logistics. In 2016, when the GT's development was in its infancy, Skoda boss Bernhard Maier told Carbuyer that the brand's Czechia production lines are "already running 24 hours a day and six days a week", although he did confirm that a Kodiaq coupe-SUV was something "the markets are asking for". When asked whether the GT could be offered in Europe in its Chinese-built form, Maier replied: "That is not a simple solution. The big issues then are logistics, shipping costs and tariff/duty costs".

While European sales of the GT remain uncertain, the Skoda Kodiaq vRS will appeal to those who favour style and performance as well as Skoda's traditional virtues of simplicity and value-for-money.