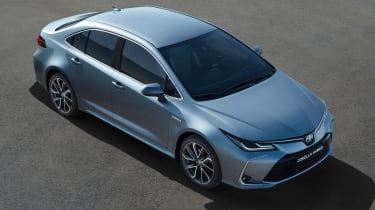 This is the new 2019 Toyota Corolla Saloon, the latest Toyota Corolla model to be revealed ahead of its launch in early 2019. The new car completes a three-car range that’s set to replace the outgoing Toyota Auris, bringing the iconic Corolla name back to the new car market. Pricing starts at £23,750.

The new Toyota Corolla saloon shares much with its new hatchback and Sports Tourer estate siblings, including striking new front-end styling – although the saloon gets a grille with horizontal slats rather than the honeycomb-effect on the hatch and estate. Otherwise, the most obvious styling change is the addition of a traditional saloon boot, with a smooth rear bumper and wider rear lights than the saloon’s siblings.

The Corolla saloon shares the same wheelbase as the estate, so interior space is likely to be much the same; exact measurements and boot space figures will be available closer to launch. We’d expect the saloon to sit somewhere between the hatchback and Sports Tourer estate in terms of practicality. 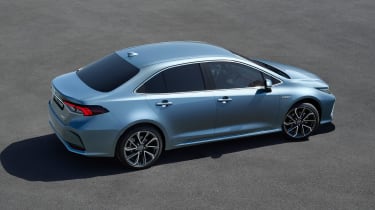 Just one engine is expected to be offered for the Toyota Corolla Saloon in the UK, namely the 1.8-litre mild-hybrid with 120bhp that’s already been seen in the Toyota Prius and Toyota CH-R. An average of 65.7mpg is quoted, along with CO2 emissions of 98g/km on the WLTP cycle.

The same active safety and driver assistance systems set for other Corolla models feature on the saloon, including autonomous emergency braking that can detect pedestrians and cyclists, plus traffic sign recognition, lane-keep assistance and adaptive cruise control.