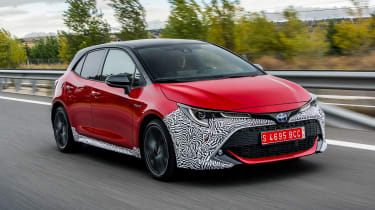 11
Buy used for less at Buyacar

The new Toyota Corolla – available to order now ahead of an early 2019 offical on-sale date – is being launched to some fanfare as its launch spells the end of the Toyota Auris name in Britain.

Toyota also claims big progress when it comes to driving dynamics. We've already been impressed by the new Corolla's ‘Toyota New Generation Architecture’ (TNGA) platform, which is also used by the latest Toyota Prius and Toyota C-HR hybrids. The Corolla shares its 1.8-litre hybrid engine with those models, but will also be available with a more powerful 2.0-litre hybrid in an effort to compete with the Volkswagen Golf, SEAT Leon and Vauxhall Astra.

Initial impressions were strong when we tried an early Australian-spec prototype, but we were able to put Toyota's claims truly to the test when we drove a late pre-production example of a European specification car.

The 1.8-litre four-cylinder petrol engine is familiar from other Toyota hybrids. It produces 121bhp and can take the Corolla from 0-62mph in 10.9 seconds. It should prove economical, with a claimed 83.1mpg derived by measuring the car under the latest WLTP efficiency testing procedures and converting it back to the old NEDC format, in order to allow comparisons to be made. 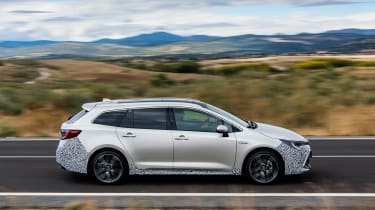 Company car drivers will appreciate the car’s comparatively low 76g/km (NEDC) CO2 emissions, which will lead to a lower rate of Benefit-in-Kind tax for company car drivers than any diesel alternative can manage. However, the 1.8-litre has never been an engine to get driving enthusiasts excited. The question is whether the more powerful 177bhp 2.0-litre hybrid – debuting in the Corolla – has more to offer those with a taste for performance.

To an extent, the answer is yes. Its faster acceleration is immediately noticeable – Toyota claims 0-62mph in 7.9 seconds, but it's still hamstrung by the standard CVT automatic gearbox that comes with both engines. Pushing hard on the accelerator sends the rev counter needle right around the dial, and while acceleration is soon forthcoming, the process is less immediate than in rival cars that offer a dual-clutch automatic gearbox. There are six preset 'virtual' ratios and steering wheel mounted paddles to enable manual gear changes, but they're not as swift as when paddle-shifting in rivals.

However, the car’s refinement improves when the engine switches off; it’s occasionally all but silent, even at motorway speeds, when the engine switches off. It's better to think of the 2.0-litre not as a performance car, but as a faster and more relaxed cruiser than the 1.8-litre model. There's not much of an economy penalty for the extra power, either – Toyota claims up to 74.3mpg, with CO2 emissions of 86g/km (NEDC).

Perhaps more important than engine response and power is how the new Corolla reacts to steering inputs, as the outgoing Toyota Auris was never a particularly engaging car to drive. Fortunately, Toyota claims “a more rewarding driving experience” in the new Corolla thanks to increased stiffness and a new suspension design. On paper, the setup is certainly more advanced than the old-fashioned previous design, and a clever adaptive damping system will be offered as an option.

The 2.0-litre car we tested had conventional suspension and 18-inch wheels, but its greater sophistication was immediately noticeable in corners; the front end responds immediately to steering inputs and rapid changes of direction can be deftly performed. When switching between hatchback and Touring Sports estate models, there was barely any noticeable difference in agility. 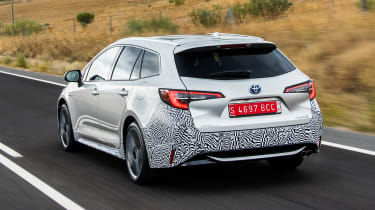 Motorway stability remains good too, but the flipside is a slightly fidgety ride,. It's far from uncomfortable, but some rivals are better at disguising road surface imperfections. It's likely that cars with 17-inch wheels will be smoother and quieter to travel in. All in all, the new Corolla is a big step forwards from the outgoing Auris.

The Toyota Auris had fallen well behind European rivals where it came to interior design, but the Corolla seems right back up to speed. The new dashboard is perhaps not as stylish as the outside of the car, but it’s uncluttered and has a layout that's easily understood. Despite ours being a pre-production car, the quality of materials feels a match for mainstream European brands.

Depending on trim level, a seven-inch digital dashboard display is available, as are eight-inch and 10-inch infotainment displays, with head-up display and wireless phone charging also on offer. The larger infotainment screen of our test car shows clear, crisp graphics, and the touchscreen is quick to respond to inputs. It's disappointing that Android Auto and Apple CarPlay smartphone integration are notable by their absence. 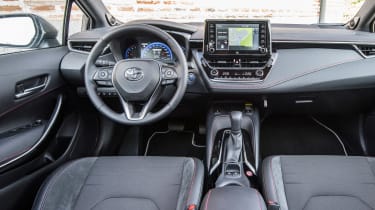 This pre-production car offered us the opportunity to check out the interior space, which seems a match for the Ford Focus and Volkswagen Golf. Four adults will be comfortable inside both hatch and Touring Sport estate models, with those in the back of the latter benefiting from slightly increased headroom. From the driver's seat, there's excellent visibility through the windscreen and in the mirrors, which are mounted to afford a greater field of view than was the case for the Auris.

As you'd expect, the biggest difference between the hatchback and Touring Sports estate is in boot capacity. The latter has 598 litres of luggage capacity when the 1.8-litre engine is fitted, while the 2.0-litre model’s different battery installation cuts that figure to 581 litres. It's a similar story for the hatchback, which offers 361 litres as a 1.8-litre, but just 313 litres with the bigger engine. Toyota has yet to publish figures with the rear seats folded down. 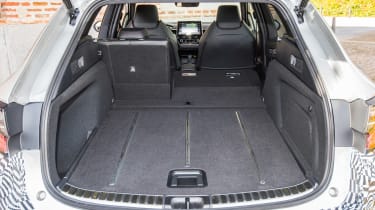 Toyota's claim that the Corolla is more enjoyable to drive than its predecessor certainly rings true. No longer does Toyota's family hatchback trail the pack for driving appeal on a twisty road. It's also as relaxing on the motorway as the Toyota Prius hybrid, but both cars also share the same unresponsive, slow-witted gearbox, so not even the powerful 2.0-litre model really cuts it as a 'driver's car'. However, those who can take advantage of the Corolla's fuel-saving hybrid technology will find the new car quite a tempting choice.