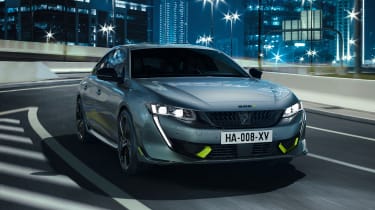 The Peugeot 508 Sport Engineered plug-in hybrid has been confirmed for production. Based on a concept revealed at the 2019 Geneva Motor Show, you’ll be able to buy the 508 Peugeot Sport Engineered in both hatchback and SW estate versions. UK prices and specifications will be released closer to the car’s launch date.

In terms of performance, Peugeot has revealed that the car will produce 355bhp in Sport mode, when both the petrol engine and electric motors are working together. The concept 508 had a conventional turbocharged 1.6-litre four-cylinder PureTech petrol engine, producing 197bhp and joined by two electric motors. Peugeot claims a 0-62mph time of 5.2 seconds and a top speed of 155mph, but the concept was slated to be slightly more powerful. The 508 Sport Engineered will be more potent than the Peugeot 3008 GT Hybrid4.

Take the car out of Sport mode and into Electric mode, and you’ll be able to travel up to 26 miles on a fully charged battery. Charging takes two hours from a 7.4kW wall box, or under seven hours from a standard plug socket. Running on a combination of petrol and electricity, the 508 Peugeot Sport Engineered is said to return 139mpg and low CO2 emissions of 46g/km. 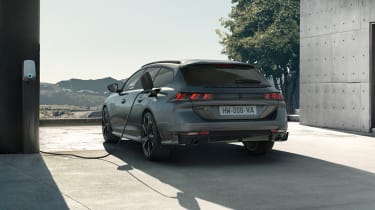 To set this 508 aside from the standard models, Peugeot has updated the car’s styling with functional aerodynamic bodywork and green detailing throughout. This includes a restyled front bumper with air intakes, a tweaked rear bumper with a diffuser, black wing mirrors, air canards on the front and rear quarter panels, revised side skirts and larger 20-inch alloy wheels. You’ll also spot a three-line green ‘claw’ motif dotted around in a few places.

The inside of the Peugeot 508 Sport Engineered features a set of sports seats trimmed in leather and Alcantara suede, ambient lighting and grey and green stitching. It also gets a 10-inch infotainment system, a 12.3-inch digital dial screen, and a head-up display. Standard equipment also includes a Focal stereo system, adaptive cruise control and night vision.

With a high level of standard equipment, a plug-in hybrid powertrain and the promise of exciting performance, the 508 Sport Engineered is likely to cost around £50,000.

Are you thinking of buying a Peugeot 508? Check out our review and compare it to its rivals on our list of the best saloon cars.