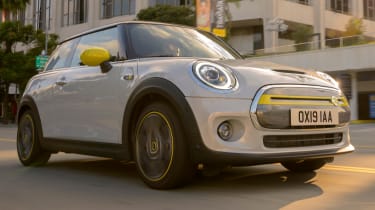 The MINI hatchback is gaining a new electric powertrain, providing a zero-emission alternative to the conventionally fuelled versions. When it arrives in showrooms, it’ll be called the MINI Cooper SE, just as the Cooper SD is the diesel version of MINI’s warm hatch. It’ll start from £24,300 including the £3,500 plug-in grant, rising to around £30,000, meaning it’s similarly priced to top-spec conventional MINIs.

MINI is owned by BMW, so the electric MINI’s 32.5kWh battery and 181bhp electric motor are both borrowed from the BMW i3, which is one of our favourite electric cars.

A fashionable, fun car like this will convert buyers from petrol or diesel cars to electric, regardless of whether the price, range, image and driving experience is perfect. At the time of writing, MINI has had over 40,000 people say they’re interested. We’ve had a quick drive of the new car before it goes on sale - so what are our impressions of the MINI Electric? 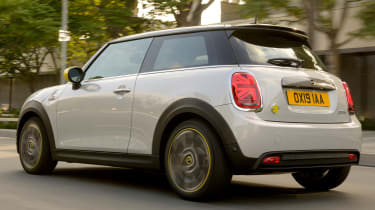 We’ll reserve full judgement until we have a longer drive (our time was limited to several laps of New York’s Formula E circuit) but initial impressions are promising. MINI says that part of the reason for the small battery is to keep the weight low, so the handling is still sweet. The MINI Electric still weighs a bit more than conventional MINIs and you can feel this through corners, but it’s very agile, involving and, importantly, fun. If MINI buyers are to convert to electric power, an electric version has to be good to drive.

Fortunately, we’d go as far as saying that the MINI Electric is shaping up to be one of the most engaging electric cars available. The relatively low weight, with the added bonus of all the power being available instantly, means it’s actually more entertaining to drive than a petrol-powered three-door hatchback.

Despite that, 0-62mph takes 7.3 seconds - half a second longer than the petrol Cooper S - and the top speed is limited to 93mph. The electric motor produces 181bhp, which is a few less than the petrol model, while the extra 130kg of the MINI Electric doesn’t help either. However, you’d be hard-pressed to notice the difference unless you drove the two back-to-back; the electric version felt as quick as you’d expect from a MINI wearing an S badge. The MINI electric has the feel of a hot hatchback, overall.

Helping that feeling is the suspension setup, which seemed firm at times during our quick drive. The circuit was much smoother than a typical British B-road, so we’ll have to wait to see what it’s like in the UK.

Here’s where the MINI Electric is a little disappointing. It offers ‘at least’ 122 miles between charges, which MINI says is more than sufficient for the majority of its customers, who tend to drive about 25 miles a day. The company also says that, for most customers, a MINI is a second car. However, this range may put off some potential buyers, as there will be rivals that offer much more; the recently revealed Peugeot e-208 promises to go 211 miles between charges. 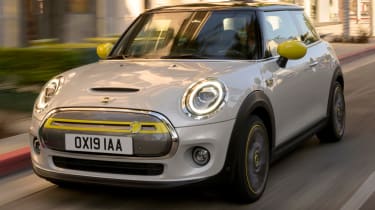 The MINI Cooper SE does feature plenty of interesting technology. It offers two settings for its regenerative braking technology, which harvests the energy lost when you slow down. It acts as a brake in and of itself, so you could drive it through the city without ever touching the brake pedal. The traction control is also embedded within the car’s electronics, so it can provide a quick response as soon as it’s needed. Even on a wet track in a pre-production model, we found hard acceleration didn’t result in any skidding.

Electric car styling falls into two distinct categories: far-out, futuristic models like the BMW i3, and ‘normal’-looking cars like the Hyundai Kona Electric. The MINI Electric falls into the latter, as there are only a few differences from the petrol and diesel models. The front grille is now mostly fared in to improve the aerodynamics, and the rear bumper is smoother and free of any exhaust pipes. The car’s black plastic wheel arches have been slightly reshaped too, as the MINI Electric sits slightly higher than the standard models. Petrol and diesel cars offer between 15 and 18-inch alloy wheel options, while only 16s and 17s are available for the electric MINI. The charger is hidden behind the fuel filler cap.

We think the yellow accents are well judged and not too over-the-top but MINI realises that some customers won’t want to stand out so much, so you can specify these accents to be painted in grey for no extra cost.

Again, familiarity is king inside of the MINI Cooper SE. Much of the interior is carried over from the rest of the range, and a screen replacing the analogue dials is one of the only noticeable changes. The MINI’s round central screen will remain, housing an infotainment screen, and the Cooper SE will feature switchable driving modes, just like the rest of the range. These are Sport, Normal and Green, allowing you to maximise the range, choose a sportier driving experience or a mix of the two. The sportiest mode firms up the steering weight and sharpens throttle response.

The MINI Electric could be the car to make EVs fun and attainable for many people. It’s a sensible price, considering MINI doesn’t struggle to shift highly specced versions of petrol and diesel cars. It feels just like a conventional car, and is an indicator of how electric cars will soon be the norm. The technology on-board will impress customers, too. Its limited range is a negative aspect of the car, although MINI may decide to offer a larger battery in the next couple of years. Our final verdict will be reserved for a full UK drive, but it seems promising nonetheless.

Read our review of the standard MINI hatchback here, and see where it features on our list of best small cars. 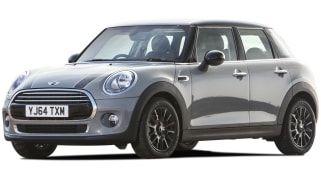