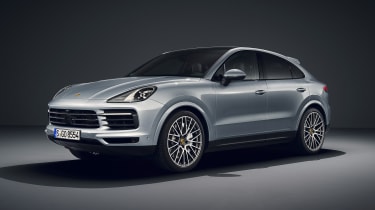 Porsche has unveiled the Cayenne S Coupe, a mid-range version of the Cayenne Coupe that will sit beneath the top-spec Turbo model. Offering additional standard equipment and a more powerful version of the twin-turbo V6 petrol engine found in the entry-level Cayenne Coupe, the S is available to order now with prices starting from £73,658.

When the Cayenne S Coupe arrives in showrooms, it will be a direct rival for the performance variants of the Mercedes GLE Coupe, BMW X6 and the Alfa Romeo Stelvio Quadrifoglio.

The Porsche Cayenne S Coupe is powered by a twin-turbocharged 2.9-litre V6 petrol engine that produces 434bhp, which is around 100bhp more than the base-spec Cayenne Coupe. An eight-speed automatic gearbox pushes power to all four wheels, all of which results in a 0-62mph-time of five seconds and a top speed of 163mph. Porsches claim the Cayenne S Coupe will achieve fuel economy of up to 23.7mpg, with CO2 emissions of 212-216g/km. 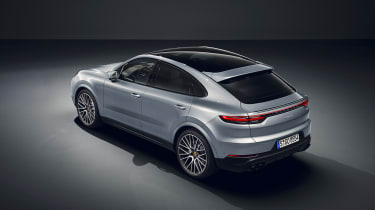 As standard, the Cayenne Coupe S gets an array of extra kit over the base model, including 20-inch alloy wheels, a panoramic glass roof, reversing camera and parking assist. Upgraded adaptive suspension and Porsche’s Sport Chrono package is also included. Options include a carbon fibre roof and additional weight-saving performance packages that lower the 0-62mph time to 4.9 seconds.

Inside, the Cayenne S Coupe carries over all the equipment found in the base-model such as the 12-inch infotainment screen, a digital dial display, eight-way adjustable sports seats and a centrally dash-mounted rev counter. The seating layout is strictly for four people, with only two individual seats in the rear. Despite a 20mm lower roofline, the Cayenne S Coupe features a 625-litre boot with the rear seats in place, and 1,540 litres available with the rear seats folded.