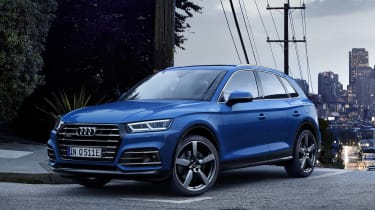 Audi has added a plug-in hybrid model to the Q5 range called the Q5 55 TFSI e. The car will rival the plug-in hybrid version of the BMW X3, which is badged the xDrive30e. The new Q5 model will be available to order from early June, with prices starting at around £55,000.

Originally announced at the Geneva Motor Show earlier this year, the Audi Q5 55 TFSI e is powered by a 2.0-litre petrol engine and an electric motor that combine to produce 362bhp. It has four-wheel drive, a seven-speed automatic gearbox, and can get from 0-62mph in 5.3 seconds before reaching a top speed of 148mph.

Audi claims the car is capable of travelling 26 miles on electric power alone, thanks to the 14.1kWh battery, and can reach 84mph. Fuel economy is claimed to be 113mpg under the WLTP cycle, with CO2 emissions of 49g/km. 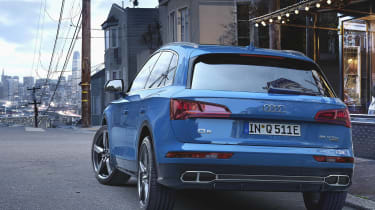 To make the car more efficient, Audi has made its Quattro all-wheel-drive system adaptive. Operating via a network of onboard sensors, it can switch from four-wheel drive to front-wheel drive depending on driver inputs and road conditions.

Similar to the other Audi hybrid models, the Q5 55 TFSI e features three switchable driving modes called ‘EV’, ‘Battery Hold’ and ‘Hybrid’. In EV mode, the car runs on pure-electric power only, while in Battery Hold mode, the car uses the petrol engine to help maintain battery charge for later use. In Hybrid mode, the car offers maximum performance and uses sat-nav information to optimise the available battery range, reserving it for use in urban areas or heavy traffic.

According to Audi, the onboard battery pack takes around six hours to charge from a standard 220V household socket. When on the move, the electric motor can recover up to 80kW from light braking in order to recharge the battery.

As standard, the Q5 55 TFSI e features the S line bodykit, a rear diffuser, 20-inch alloy wheels and LED headlights. Inside, it gets the latest tech from the Audi range, including a digital dial cluster and an 8.3-inch central infotainment screen. Also featured are electrically adjustable heated sports seats and three-zone automatic climate control. The rear seating is fully adjustable, with a sliding rear bench and back angle adjustment.

Do you want to know more about the Audi Q5 range? Read our in-depth review for full details.