Skoda has unveiled a new pick-up truck concept, called the Mountiaq. It was designed and built by a team of 35 apprentices from Skoda’s Mlada Boleslav in-house vocational school over a period of eight months, using the brand’s Kodiaq SUV as a basis. Features include a redesigned suspension setup, a unique paint scheme and an array of off-road accessories.

The apprentice team started by strengthening the Kodiaq’s body shell and removing its rear cabin, replacing it with a flat load bed and a new rear bulkhead. The team also flared the SUV’s wheel arches and fitted redesigned front and rear bumpers, new running boards and a functional rear tailgate.

The best pickup trucks to buy in 2019

Under the bonnet of the Mountiaq is a turbocharged 2.0-litre TSI petrol engine, producing 187bhp. The car's ground-clearance has been raised to 29 centimetres, with a raised suspension setup and new 17-inch alloy wheels wrapped in off-road tyres. As part of the upgrades, the Mountiaq’s track width has also increased by around an inch over the standard Kodiaq. 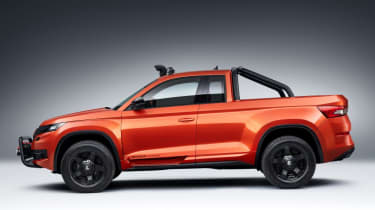 To complement the vehicle’s rugged design, the students fitted the Mountiaq with a range of off-road accessories, including a new front bull-bar with a winch, snorkel air intake, a roof-mounted LED light-bar and a rear roll-bar. The bodywork is finished in a unique Sunset Orange paint colour, developed especially for the project.

Inside, the Mountiaq gets leather interior trim, orange accents for the steering wheel and gear lever surround, an uprated stereo system and a new headlining with an illuminated “Skoda” emblem. 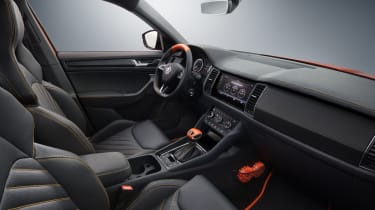 The Mountiaq is the sixth student-built concept car to come from Skoda’s in-house vocational school. It follows a range of similarly unique one-off models, such as 2016’s Skoda Fabia pick-up, 2017’s Rapid Spaceback-based Atero coupe and a convertible version of brand’s mid-sized Karoq SUV, called the Sunroq, built in 2018.

Do you want to know more about the Skoda Kodiaq? Read our reviews of the Kodiaq SUV and the Kodiaq vRS.