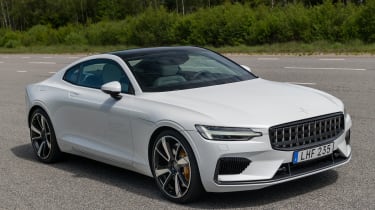 The Polestar 1 is the eagerly anticipated debut from the new Volvo brand, as the firm aims to shake up the hybrid and pure-electric market sector. It’s an eye-catching first effort, with a futuristic, concept-car style, a 599bhp petrol-electric hybrid powertrain, four-wheel drive, carbon-fibre bodywork, and a substantial price tag starting from £139,000.

The car’s internal combustion power comes from a four-cylinder supercharged petrol engine, producing 304bhp The Polestar 1 is set to be the only car from the brand to feature a conventional engine, as from the next model onwards, the Polestar 2, all of the brand’s cars will be pure-electric EVs.

First deliveries of the Polestar 1 aren't due to be made until the final quarter of 2019 but we’ve already driven a prototype on Swedish roads and around Volvo’s Hällered test track. 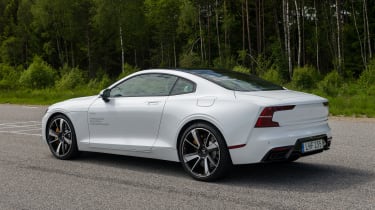 The car’s design closely follows that of the original concept, which was first revealed in 2013. The nose features the familiar Volvo design, including a prominent front grille, narrow angular headlights and wide rear arches, which complement the swooping coupe design.

Inside is where the Polestar 1’s connection to Volvo becomes even more apparent, with an identical steering wheel to the XC40 SUV, except for the badge. The sizeable portrait infotainment screen and heater and ventilation controls are also borrowed from the brand’s other mass production models. The cabin is neatly put together but lacks some of the high-quality materials you’d find in other cars at this price point. 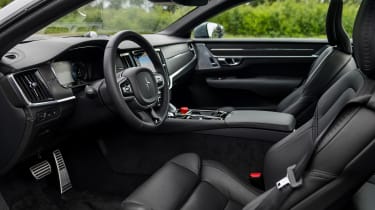 The rear seats of the 1 offer a reasonable amount of space for back seat passengers but the swooping roofline is likely to impinge on headroom for taller adults. The boot features a unique design, with the car’s electrical systems displayed behind a screen, but the downside is just 125 litres of luggage space.

A manually adjustable suspension system has been added to Volvo’s SPA platform for the Polestar 1. This system features small dials under the bonnet and above the rear wheels to adjust the suspension, with a total of nine different settings. Whether owners regularly use the different settings remains to be seen.

According to Polestar, our test car featured a medium stiffness suspension setup, which the firm recommends as a ‘Sport’ setting. Even on the standard 21-inch alloy wheels, this 2.3-tonne car felt composed and comfortable in town at lower speeds.

A pair of electric motors on the rear axle produce 228bhp and are powered by a 34kWh battery. The petrol engine is also assisted by an integrated starter generator, adding an additional 67bhp. When combined with the 304bhp supercharged petrol engine at the front, the powertrain gives the Polestar 1 a supercar-matching 599bhp. The result is a claimed 0-62mph-time of a touch over 4 seconds, with a top speed of 155mph.

The Polestar 1’s powertrain doesn’t quite deliver the colossal acceleration of the Tesla Model S but its torque vectoring allows you to push the car hard at high speeds, providing plenty of grip even on a soaking wet test track. The conditions during our drive meant we weren’t able to test the car’s claimed acceleration time but we can confirm that the powertrain provides more than enough performance to haul the 1’s substantial weight.

The 1 feels assured when you drive it quickly, disguising its heft impressively with minimal body roll during cornering. The steering lacks feel but is precise and responsive, and the brakes offer positive pedal feel, unlike other hybrids. 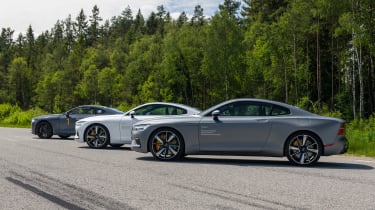 On rougher backroads, it still feels composed despite a hint of tyre roar and a noticeably firm ride at high speeds. Overall, it offers a comfortable ride for a mid-sized GT car.

When driving in ‘Pure’ electric-only driving mode, the Polestar 1 can achieve a claimed driving range of up to 80-odd miles and when the petrol engine does chime in, the noise level barely increases. If you’re after a burbling GT soundtrack over pure-electric running, you may want to look at the Aston Martin Vantage or Mercedes-AMG S 63 coupe instead.

The Polestar 1 is a premium product with a price tag to match and its stunning design can’t hide its Volvo origins. It is, however, virtually unrivalled; there are very few cars on sale that can match its zero-emission range, accomplished hybrid powertrain and the substantial pace it offers. The Polestar 1 is a potential benchmark for hybrid performance GT cars of the near-future.

See how the Polestar 1 compares to the best hybrid and electric sports cars you can buy in 2019. 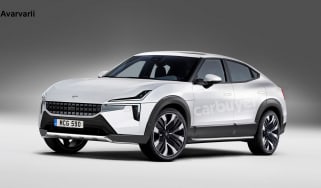 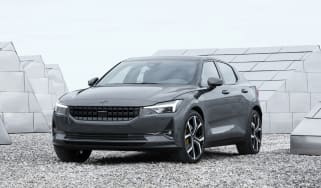