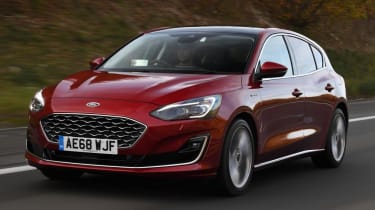 It’s always been a dilemma facing car buyers with a budget – should I have a well-equipped, range-topping model from a mainstream maker or sacrifice some luxury and get a prestige brand?

Increasingly the answer has been to go with a more premium badge, with the likes of BMW, Audi and Mercedes seeing booming sales while the top-spec Fords and Vauxhalls struggle to make an impression with buyers.

Ford’s answer was to introduce a new top trim, called Vignale. It offers a substantial amount of extra equipment and styling tweaks compared to the already well-equipped Titanium X models, as well as plush leather trim and extra refinement. It’s a list which will look pretty tempting to anyone wincing at the prices of optional extras on a German brand. 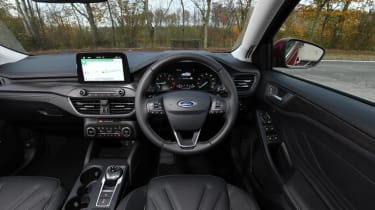 The Focus was the last model to get the treatment, and in many ways it’s the most convincing. Prices start at just over £28,000 – or around £2,800 more than the equivalent 1.0 EcoBoost 125PS in Titanium X trim. That price difference remains pretty much consistent throughout the range, right up to the flagship diesel estate, which costs nearly £30,000. That seems pretty expensive for a Focus, but not so much when you compare it to an equivalent spec BMW or Volkswagen Golf.

Stepping up to a Vignale model adds larger 18-inch wheels, LED headlights, a wide-view reversing camera, heads-up display for the navigation and other functions plus Active Park Assist. This means the car can park itself automatically. On top of that, there’s full leather trim with Vignale badging, a B&O sound system, multi-colour ambient lighting.

It may be the luxury model, but Ford has also made the Focus Vignale look a bit sportier than the Titanium. There’s less chrome and more body-coloured trim, while new bumpers and the bigger wheels give it a more aggressive look. As a result, it’s not as sporty looking as the ST-Line models but looks more striking than a Titanium. 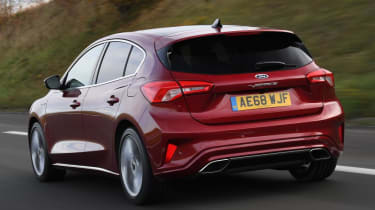 Inside, Ford have made an extra effort in the details to make the Vignale feel premium and better built than the standard Focus models. There’s contrasting stitching on the dashboard, Vignale badging and the leather seats, but aside from that it’s standard Ford fare.

That’s not a bad thing though, as the Focus feels very well built. There are still some hard plastics in places which you don’t often touch around the lower centre console, but it appears to be as well-built as a comparable BMW 1 Series.

You don’t have to sacrifice anything in the driving dynamics either. Like the rest of the Focus range, the Vignale has positive and direct steering, and it rides well over Britain’s harsh roads, absorbing bumps easily. It’s relatively quiet too, although the larger 18-inch wheels can generate some quite unpleasant tyre roar on harsher road surfaces.

The entry-level car is powered by a three-cylinder, 1.0-litre engine. If you’d never tried it you would imagine it would be woefully underpowered, but with the help of a turbocharger and mild-hybrid electrical assistance, it produces an impressive 123bhp and is perfectly quick enough for most drivers. It’s refined too and never seems strained, even at motorway speeds.

There’s a choice of a manual or automatic gearbox; we really like the six-speed manual, although there’s no shame in choosing the auto if most of your driving is around town. The diesel is as efficient as you’d expect, but the extra cost means you need to do your sums carefully to make sure it is cost-effective for you. The heavier diesel engine means the Focus doesn’t feel quite as lively in corners, either.

The premium Vignale badge means the starting price of this Focus is now stumbling into the territory of prestige brands and some niche models which are arguably a lot more interesting and more exclusive than a humble Ford Focus. Paying more than £28,000 for a 1.0-litre hatchback seems a bit much when compared to premium badged rivals. But the Focus in all of its guises is a well-thought through car, which makes perfect sense for a large number of buyers. The extra Vignale equipment and trim add an extra level of appeal to that package.

Do you want to know more about the Ford Focus range? Why not read our reviews of the Focus Hatchback and Focus Active models.