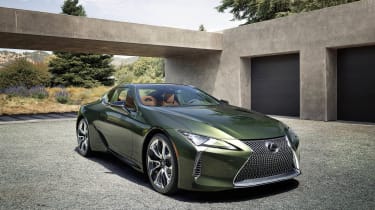 The Lexus LC Limited Edition has been revealed, featuring upgrades inside and out, plus an exclusive green paint colour. It’s on sale now until the end of 2019, with first customer deliveries expected in November. Prices are likely to start at around £90,000, which represents around £2,500 more than the standard range-topping Sport Plus version of the LC 500 coupe.

Inside, the leather seats are trimmed in a new Saddle Tan colour, and the door cards are finished in Alcantara suede-like fabric that’s a slightly darker colour. The rest of the upholstery is trimmed in Black Amber leather, with contrasting brown stitching, and the Limited Edition also gets exclusive laser-etched tread plates inspired by the car’s intricate brake lights. 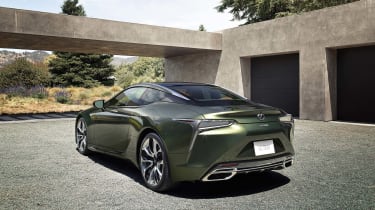 Panoramic sunroof aside, the equipment list is carried over from the Sport Plus model. As a result, the Limited Edition features a colour head-up display (so you can look at speed and navigation directions without taking your eyes off the road), two-zone climate control, aluminium pedals and a 13-speaker Mark Levinson audio system. 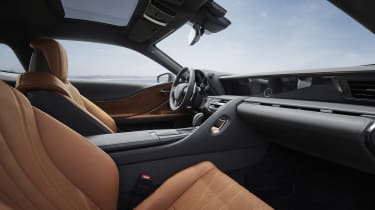 Only one letter makes a huge difference, as the LC 500h employs a hybrid powertrain consisting of a 3.5-litre V6 petrol engine and an electric motor. It’s the same setup as in the Lexus RX SUV, and its combined power output of 354bhp means 0-62mph takes five seconds. It’s more fuel-efficient, managing up to 34.8mpg.

Read our Lexus LC review, and see where it features on our lists of best-looking cars and slowest-depreciating cars on sale.