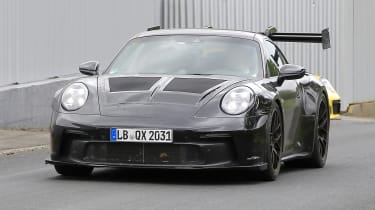 A new Porsche 911 GT3 RS looks to be in development, judging by these new spy shots. The GT3 RS is one of the most hardcore 911s, built primarily for racetrack use with weight-saving measures and aerodynamic changes designed to stick the car to the ground at high speed.

The most noticeable change for this new GT3 RS is an unbelievably large top-mounted rear spoiler, which is very nearly as tall as the car. There’ll be another ‘ducktail’ spoiler below it (above the rear light-bar), and it looks like this 911 variant will get wider bodywork, two central exhausts and lots of vents and ducts to control airflow.

It will look like it belongs on a racetrack rather than on a public road, a theme continued by the centre-locking lightweight wheels - designed to make changing wheels a very quick process in the pit lane. The fuel filler cap seems to have been moved to the front wing, which would speed up refuelling in a race situation. 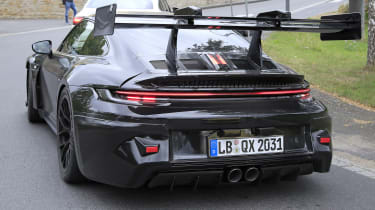 A naturally aspirated engine will feature. It should be about 4.0 litres in size, and will produce around 520bhp - a few more bhp than the outgoing GT3 RS. The Porsche 911 GT3 will give buyers the choice of manual or ‘PDK’ automatic gearboxes, but the RS version will only come with the auto because the it’ll be quicker on a track. This prototype also seems to have carbon-ceramic brakes, which will be a costly option if they’re not fitted as standard.

With weight-saving likely to be high on the agenda, the GT3 RS will be sparse inside compared with a standard 911. You can expect less soundproofing, fabric door straps and less on-board technology, and Porsche may give you the option of further measures to make the car lighter (or add some features back in).

Read our review of the Porsche 911 Targa, or check out the newly updated Porsche Panamera. 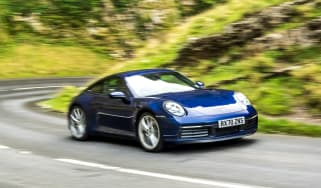 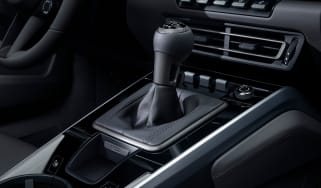 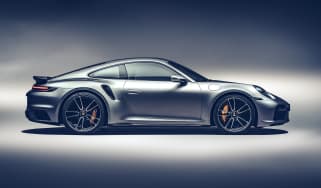