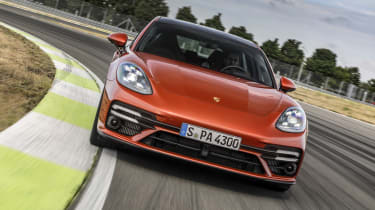 The range-topping 690bhp Panamera Turbo S E-Hybrid model has arrived, after the facelifted 2020 Porsche Panamera was revealed earlier in the year. It’s the most powerful and the most expensive version, with prices starting from £140,130 - over double the entry-level Panamera.

The flagship Panamera still has a 4.0-litre V8 petrol engine but power has risen by 21bhp to 563bhp. The V8 is mated to a 136bhp electric motor, which allows 0-62mph acceleration of 3.2 seconds - two tenths quicker than before, and just a tenth off the non-hybrid Turbo S. Meanwhile, a bigger 17.9kWh battery gives an electric range that’s roughly 30% more, at 31 miles.

Replacing the previous Turbo model, the new Panamera Turbo S offers an extra 79bhp and more pulling power. The 4.0-litre twin-turbo V8 has been thoroughly upgraded and is now able to haul the Turbo S from 0-62mph in just 3.1 seconds and on to a top speed of 196mph. As standard, the range-topper gets advanced air suspension, a roll stabilisation system and a feature that distributes power in varying amounts to each wheel. 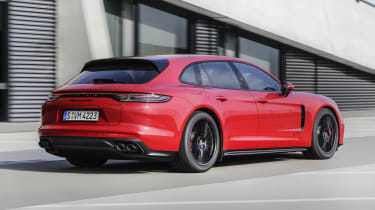 Meanwhile, the GTS model (our favourite version of the outgoing Panamera) gets a power boost from 454bhp to 473bhp, and its engine is tuned to feel more like a classic sports car, so the full amount of power only available right at the top of the rev range. GTS cars also get a new sports exhaust to amplify the sound of the V8 engine.

Several plug-in hybrid versions will still be available, with the new 4S E-Hybrid sitting under the Turbo S E-Hybrid. The 4S E-Hybrid uses the 2.9-litre V6 petrol engine from the entry-level Panamera alongside a 134bhp electric motor. The 4S E-Hybrid can travel 33 miles on electric power alone. When the two power sources are working together, the new PHEV can hit 0-62mph in 3.7 seconds and a top speed of 185mph.

Only a Porsche aficionado would be able to immediately spot the styling changes for the Panamera because updates are limited to reworked front and rear lights, and a new LED light bar across the rear end. The Turbo S features a slightly different front bumper design, with a body-coloured insert separating the air intakes. This insert, plus other trim pieces, is painted black on GTS models. As before, Panamera E-Hybrid models get vivid green brake calipers and badges.

Across the range, three new 20- or 21-inch alloy wheel designs are now available (taking the total to 10), and there are extra colours to choose from. 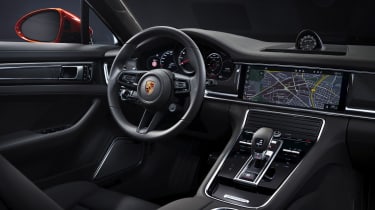 A new, much wider touchscreen is the most noticeable change inside, and the feel is similar to the futuristic (and fully electric) Porsche Taycan. The system can display local road sign and hazard information, and it now offers wireless Apple CarPlay. Wireless Android Auto is still in development. Lane-keeping assist is now standard, while you can have lots of other driver assistance features including matrix LED headlights, a head-up display and night vision assist.

Read our guide to the best hybrid estate cars, or check out one the Panamera Sport Turismo’s main rivals, the Audi RS6 Avant.