Perfect around town, but the Peugeot 108 feels out of its depth on the motorway

The Peugeot 108 trails the Skoda Citigo and Volkswagen up! for driving fun, while on the motorway the Hyundai i10 feels decidedly more stable. However, the 108 is a big step up from the old Peugeot 107, and feels a lot better engineered. The steering is light and the ride quality is better than it used to be, so if you want a car designed primarily for the city, you can't go far wrong.

There’s no longer a choice of engines; all 108s now come with a 72bhp 1.0-litre engine and a five-speed manual gearbox. Previously, a more powerful 1.2-litre engine and an automated version of the gearbox were offered. Unlike many rivals, there’s no electric version yet. 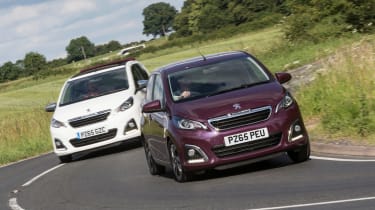 If you spend most of your time darting around town, the 1.0-litre engine should suit you perfectly, as it feels nippy, agile and easy to drive. However, if you frequently venture out and onto the motorway, we'd advise finding a used example with the larger engine. 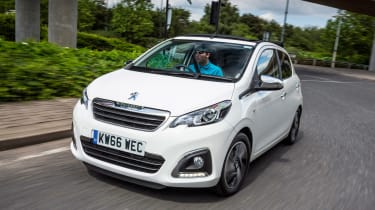 From a standing start, the less powerful engine gets to 62mph in almost 14 seconds. The 1.2-litre does the same sprint in 11 seconds, however, which is faster than most rivals can manage.