The Peugeot 108 hasn’t had any obvious reliability problems yet, so the omens are good for the future. It also comes with a lot of standard safety kit for peace of mind.

Peugeot isn't famed for its reliability, but this has improved in recent years. The 108 was rated average for reliability in our 2017 Driver Power owner satisfaction survey of cars currently on sale in the UK. Of the owners who responded, 6% reported experiencing a problem with their car at least once. The car hasn’t appeared in the survey since then but in 2020, the mechanically identical Citroen C1 finished in 72nd place, with 12.2% of owners reporting faults.

The model carries over a number of tried-and-tested components from the old Peugeot 107, including the small 1.0-litre engine – so anyone worried about the car's longevity should take confidence in that. 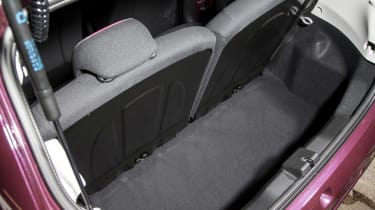 The 108 was awarded four out of five stars by Euro NCAP, scoring 80% for both adult and child occupant protection. Crash tests have become more stringent recently, so the car's failure to achieve the full five stars is not hugely significant isn’t as much of a worry as it would have been previously. Either way, the Hyundai i10 also scored four stars, while the Volkswagen up! and Skoda Citigo only scored three stars when they were retested in late 2019.

There's plenty of clever safety technology and equipment as standard with the 108, including anti-lock brakes, electronic stability control, six airbags and two ISOFIX child-seat mounts. Hill-start assist is also standard, so setting off from a slope shouldn’t be a problem.

A spare wheel is optional on the lower-spec Active trim and standard higher up the range. Allure and Collection models can also be equipped with a lane-departure warning system and active city braking.