All Peugeot 108 models cost £145 in road tax, while fuel, insurance and maintenance costs should be low, too

The Peugeot 108 is only available with one petrol engine, with no diesel, hybrid or electric versions on offer. The 108 costs about the same as its rivals, such as the Kia Picanto, Citroen C1 and Hyundai i10, although the discontinuation of the previous entry-level Active trim means prices aren’t as low as they were.

Resale values after three years depend on the trim level you go for. The top-of-the-range models are expected to do less well than the others, but most 108s will return around 47% of their purchase price. Unless there are specific offers, the higher models will be quite a bit more expensive on a monthly finance agreement than the cheaper versions because of bigger price tags and steeper depreciation. 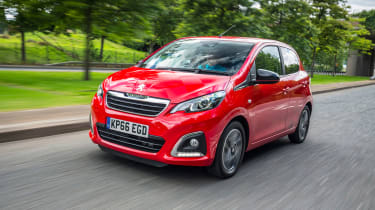 The 1.0-litre petrol engine is very economical. Now only offered with a manual gearbox, it can return 54.8-58.9mpg and emits up to 111g/km of CO2 for a competitive Benefit-in-Kind (BiK) band for business users. An automatic version and a 1.2-litre engine were previously available, but these were both slightly less economical than the 1.0-litre.

After the first year's CO2-based road tax (generally included in the on-the-road price), all Peugeot 108s cost £150 a year to tax. 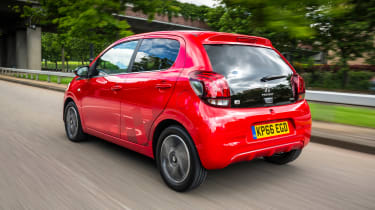 The Peugeot 108 should allow you to keep a lid on long-term running costs, with all models falling into a low insurance group. 108s fitted with the 1.0-litre engine fall into groups 6-8. Those seeking super-low insurance should check out the slightly bigger but similarly priced Skoda Fabia, as all 59bhp versions sit in group one. Peugeot’s ‘Just Add Fuel’ offer covers all the costs of motoring (except fuel) in one monthly payment, and is even available for new drivers - although 18-20 year olds will need to have a telematics box fitted.

Peugeot offers a three-year/60,000-mile warranty on the 108. That’s the same as you’d get on a Volkswagen up!, but it pales in comparison with the Hyundai i10 and Toyota Aygo, both of which are covered for five years, while the Kia Picanto and MG3 are covered for seven years.

Repair costs should be low thanks to the fact the 108 shares many of its parts with the Citroen C1 and Toyota Aygo. The prescribed servicing intervals mean you’ll need to take it to the dealer once a year or every 16,000 miles (10,000 miles for the 1.2-litre model) – whichever comes sooner.