There are six engines available to 308 SW buyers in total: three petrols and three diesels. Some are restricted to certain gearboxes and trim levels, but overall, the 308 SW gives buyers plenty of choice.

The SW's soft suspension means there's some body lean in corners, but this is understandable given the car is so comfortable, particularly at cruising speeds.

The manual gearboxes aren't very satisfying to use and the steering isn't particularly involving either, but for most buyers the driving experience won't be as important as the car's practicality. The only problem for Peugeot is that several of the car's rivals, like the Ford Focus Estate, Vauxhall Astra Sports Tourer and Skoda Octavia Estate, are better to drive.

The smaller-than-average steering wheel may take a little time to get used to, but it seems to make sense once you’re on the move.

For a sportier drive, the Ford Focus Estate is a better bet, but given that estate cars are mostly meant for long trips and motorway cruises, an exciting driving experience will probably be low down most buyers’ list of priorities. 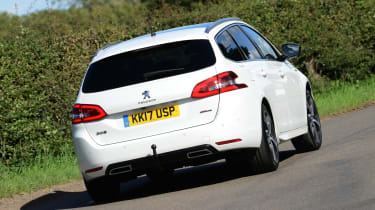 The best petrol engine is the 1.2-litre PureTech 130, which produces 129bhp despite its small size. It's a smooth and quiet engine that's actually rather good fun to drive on the open road.

There’s also a less powerful 1.2-litre PureTech 110, which is only available with a six-speed manual gearbox. It does the job almost as well, but the smaller amount of power means it can sometimes feel strained under pressure, particularly if you often carry passengers and all their luggage.

The 1.6-litre PureTech 225 is the most powerful of the petrol engines with 221bhp, and is the fastest model in the 308 SW range with a 0-62mph time of 7.6 seconds. It’s only available as a GT model with the eight-speed automatic gearbox. 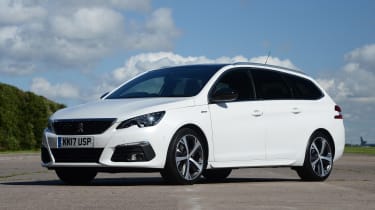 The 308 SW is at its best with a diesel engine and the latest 1.5-litre BlueHDi is the pick of the bunch, providing decent power along with exceptional fuel economy.

To its credit, this eco-special doesn't sacrifice refinement for economy. Some rivals have intrusively loud engine noise and extremely long gear ratios that can make smooth town driving a chore, but the BlueHDi 130 308 feels as relaxed and sounds almost as quiet as other models in the range. If you want a diesel 308 SW, look no further than this excellent engine.

At the top of the range, the GT model comes with a 2.0-litre BlueHDi diesel, but this more performance-orientated model isn't available with a manual gearbox – instead it gets Peugeot's eight-speed automatic only. You can still change gear yourself using the steering wheel-mounted shift paddles, though.

The GT is a strong performer, although it can't match some faster rivals’ performance, while the Sport mode button on the dashboard sharpens throttle response, turns the dials red and pipes louder engine sounds into the cabin.

It's the most powerful and therefore the fastest diesel model in the 308 SW range, accelerating from 0-62mph in a respectable 8.4 seconds. The strong performance from the turbodiesel helps in everyday driving, too – lots of low-down pulling power from the gutsy engine means motorway overtakes are safe and easy.